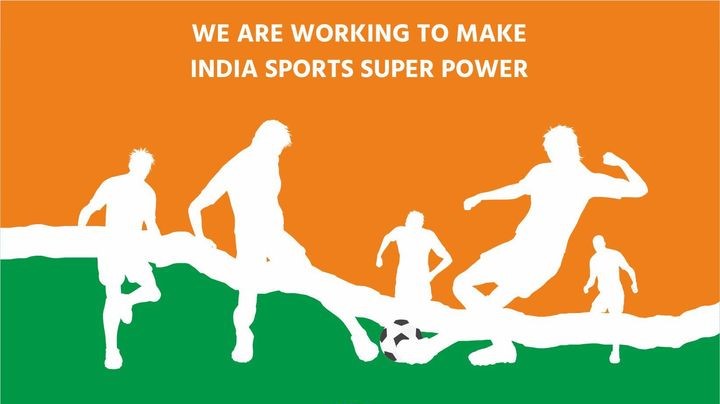 -The International Charter of Physical Education and Sport, UNESCO, 1978

Sports is generally a  common thread that binds people together and helps in developing a feeling of patriotism and unity that can counter regional factionalism and the sinister design of various separatist forces. Sports has a huge role to play when it comes to nation-building as it helps in elevating qualities like discipline, determination, teamwork and a passion for fitness in the psyche of a nation. In the post-independence period, India had been busy with many other problems, but time is ripe that the Country decides to work on achieving excellence in Sports.

It is interesting to note that the first Gold in Olympic Games which India won; was way back in 1928 in Hockey. This was won by the sheer excellence of Late Maj Dhyan Chand and other members of the Team and credit is totally to the dedication, sincerity, and hard work of the Team. Similarly, first individual medal; a Bronze;  by an Indian was won in an Olympic game;  was by Norman Pritchard in 1900. Both these wins flag one issue; that India indeed had a love for sports and people worked hard despite very minimal organisational support. As a corollary, it can easily be concluded that with an organisational support India indeed has the potential to do well in sports in the international arena. Success in recent years in Cricket and shooting bears testimony to this fact.

It is heartening to note that the culture of sports is picking up in India; albeit little slowly. Today there are 568 colleges/ universities, including a National Sports University established in Manipur by an act of Parliament in 2018, which are offering courses in physical education/ sports. In addition Netaji Subhash Chandra Bose National Institute of Sports (NIS) at Patiala is dedicated to train coaches since 1961. It is Asia’s largest sports institute and offers following courses:-

Over a period of time, under the aegis of the Sports Authority of India and other government organisations including Armed Forces hospitals as well as in the private sector a number of Sports Medicine Centres have also come up, which are essential for the selection of the right kind of potential sportspersons and helping the athletes to tackle the sports-related injuries. However, the sheer size of India calls for many more training establishments and testing/ rehabilitation centers to come up.

An Analysis of Indian Performance in Olympic Games-

This table highlights the following: –

There are few aspects that this table flags:-

Selection to Medal– The 2006 Sports policy meant to prepare athletes for success in the international events a study (SPLISS) was done which identified nine pillars to  influence the state of sports within a nation and its success in the global sporting arena. These and some other factors which based on experience of the author are as follows:-;

Funding-Central spending on sports has beensteadily increasing throughout the twenty-first century. The sports budget has increased from Rs 702 crore, in 2014–15, to Rs 2,216 crore in the 2019–20’s interim budget.

Khelo India– In 2016, the three existing schemes, namely; the Rajiv Gandhi Khel Abhiyan; the Urban Sports Infrastructure Scheme and the National Sports Talent Search System were merged into the Khelo India scheme. The scheme was launched primarily to encourage participation of youth in annual sports competitions and for creation of sporting facilities at the grassroots level. In this connection a promise was made by the Sports Ministry       to broaden the National Women Sports Festival but so far this promise has not been converted into reality. It should be done at the earliest as India stands good chance in bagging medals in the Women’s category.

Training– A number of Sports academy across the country for various discipline were required to be established. A total of 10 numbers of them have been established by the Sports Authority of India and five more are being established. A number academies are also coming up in private sector too. These academies indeed help in taking sports to common people. It is also felt that atleast government should consider establishing most of the new academies in rural India and also corporates be encouraged to establish them in Rural India as part of their Corporate Social Responsibility.

National Sports Development Fund (NSDF)- It was established in 1998 under the Charitable Endowments Act 1890 and notified by the Government of India in November, 1998 with the aim to impart momentum and flexibility to assisting the cause of sports. The Fund helps sportspersons by providing them opportunities to train under coaches of international repute with technical, scientific, and psychological support and giving them exposure to international competitions. It also provides financial assistance for the development of infrastructure and other activities for the promotion of sports. The role of the Fund is supplementary to the overall policy and activities of the Department of Sports in achieving excellence in sports. The Fund is managed by a Council constituted by the Central Government. Union Minister in charge of Youth Affairs and Sports is the Chairperson of the Council. Members of the Council include senior Officers of the Department of Sports, Chairman & Managing Directors of Private and Public Sector Companies / Corporations, representatives of Sports Promotion Boards.

Social Security for the Sports Persons– It was promised to devise a special scheme for sportspersons to ensure social security. However, no such scheme has not developed. In this connection in response to a question raised in the Lok Sabha, on 19 July 2018, it was informed that the pensions for medallists at various international events had been doubled on 1 April that year.

Directive to Business Houses to Support Sports-It was promised to issue a policy directive to Corporate houses to encourage business houses to patronise sports and sportspersons. However, there has been no policy initiative by the Government, through sports development remains as one of the activities listed in the Companies Act, 2013, for businesses to invest in, as part of their corporate-social-responsibility spending.

Sports facilities in the Housing Colonies-It was promised by the Government that all new housing colonies will be mandated to include Sports facilities. No such mandate has been introduced by the government or any of the state governments.  It should be done at the earliest as it would help to build sports culture in the country.

Need for a Better Sports Infrastructure–

Need for Sports Federations to be managed by Sports Persons-Except Saurav Ganguly who is heading BCCI none of the heads of the sports federations including the IOA are headed by any sportsperson of repute. Extraordinary success in Cricket needs to be emulated by other federations and it should become mandatory for a President and Secretary to have been an international player and also not more than two tenures be permitted for an official. These changes will help the federations to understand the psychology of the sportspersons better, officials will have greater credibility and also fresh ideas will keep coming to the executive committees of the federations to further improve the performance of the athletes of their respective federations. One major ill of the organisational structure of the sports associations in India is that these have either been reduced to being the preserve of a particular family or of fiefdom of politicians/ bureaucrats. A report suggests that 47% of the sports associations are headed by politicians. Bureaucrats are also not far behind. At least seven associations were headed by them in 2013, as reported by Gaurav Bisht in the 07 Oct 2013 in The Hindustan Times.

Initiatives by the Government– The government has launched a number of initiatives as part of the CBSE high school curriculum. However many schools lack the requisite infrastructure for the successful implementation of these initiatives. Although funds are being provided under the sports grant scheme for the development of sports infrastructure lack of space in the schools needs to be addressed by adding this requirement at sanctioning of permission to establish a school.  In the interim Locality wise sports infrastructure should be created by the civic bodies; either funding them directly or getting the same sponsored. Such facilities can be utilised by schools on a time-sharing basis. Schools may also be encouraged to share the cost of maintenance of these facilities.

Impact of International Leagues- Given the rising popularity of sports, international leagues and clubs have set up academies in major cities like Delhi-NCR and Mumbai to support grass-roots development.

Sports, games, and physical fitness have been a vital component of our civilization, as is evident from the existence of the highly evolved system of yoga and a vast range of highly developed indigenous games, including martial arts. However, the form and nature of games and sports have changed over the years. Sports help in bridging the social, religious, regional and communal divide and help people to build a positive outlook. Therefore it is in the national interest that India lays more emphasis on developing a sporting culture.  India has the unique advantage of having the youngest population in the world (356 million youth) and therefore it is possible to achieve excellence in sports.  There is no doubt that India has to go a long way in catching with the leading pack of nations but there is no other choice. India should make a long-term plan stretching over 15 years to reach its right full place in the comity of nations. In this long-term perspective; short-term and medium-term objectives need to be set. These objectives should be for disciplines in which country has the probability to do better; like shooting, archery, boxing (in lighter weights), Canoeing and Kayaking and wrestling (lighter weights and females), and Badminton, Hockey. Extra emphasis on capacity building of coaches should be done. Finally, games and sports should proliferate to villages which will help to enhance the size of potential sportspersons and as such improvement in the quality of performance.  It needs to be noted that developing India into a sports superpower is a dream which every India should see and try to realise it.

Presently he is Vice Chairman of Think Tank, “STRIVE”,  after retirement is pursuing his favorite hobby of writing for newspapers, journals, and think tanks.

7 thoughts on “Future of Sports Education, what is Necessary to Transform India into a Sports Superpower By Maj Gen AK Chaturvedi (Retd)”