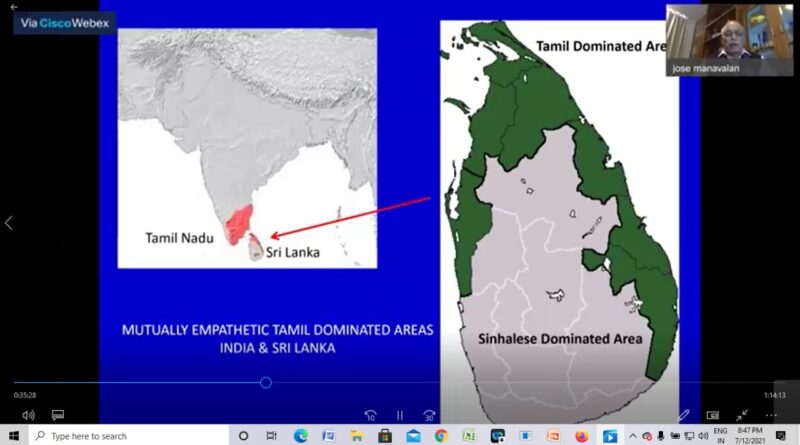 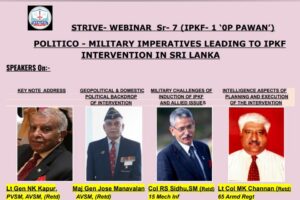 The Strive and SVIF in collaboration with IPKF Veterans organized a webinar on 04 Jul 2021 on the IPKF Operations by the Indian Armed Forces in Sri Lanka from 29 Jul 1987 to 24 Mar 1990. A total of about 80 participants were part of the webinar, which was also live-streamed on Facebook and YouTube.

The operations undertaken by the IPKF of the Indian Armed Forces were first of their kind in the History of Independent India. Although not mandated by the UN, but it met the basic criterion of consent, impartiality and use of minimum force as per Chapter- VI of the UN Charter and was in pursuance of the Indo- Sri Lankan Peace Accord of 1987.

The basic task of the IPKF was to facilitate the end the civil strife between the Sri Lankan Tamil Militant Groups and the Sri Lankan Army. However, the mission of ‘Peace keeping’ somewhere along the line got changed to ‘Peace enforcement’. There is a need to analyze the cause for such a change and also its effect. Also, there were 1300 Indian soldiers who gave the supreme sacrifice during the operations. The nation remains indebted to these brave hearts, who, by their act of valour added new chapters in the glory of the Indian Armed Forces. Regrettably, it is important to appraise that India did not achieve any of the political objectives/ military missions in Sri Lanka.

The aim of the Webinar was to get a bit of clarity on the subject and for that, the Team STRIVE felt that the experiences of those veterans, who were part of the IPKF and were in the thick and thin of the operations for two years, seven months, there weeks and three days, would help the current generation of the Armed Forces to draw certain conclusions for future reference.

Before the details of the webinar are taken up, the ‘Team STRIVE’, would like to put a disclaimer that the views expressed by the speakers are their personal views and The Team STRIVE takes no responsibility for them. However, the analysis is definitely based on the views expressed during the Webinar.

The format adopted for the conduct of the webinar was as follows:-

Issues Flagged by the Speakers 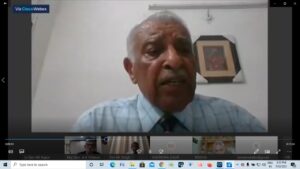 Lt Gen NK Kapur, PVSM, AVSM (Retd) – The Key-note speaker put in perspective, issues leading to induction of the IPKF into Sri Lanka. The major issues flagged by the General were as follows:- 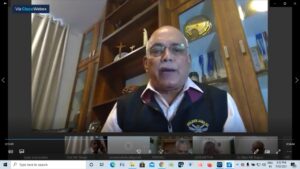 Maj Gen Jose Manawalan, AVSM(Retd) – The general traced the political history, of Sri Lanka, from its independence in 1948 to the induction of the IPKF, which clearly highlighted how the successive govts of Sri Lanka were unfair to Tamils and how Tamils had been reduced to the status of the second class, citizens in their own country. The important point of his talk in relation to IPKF operations included the following:- 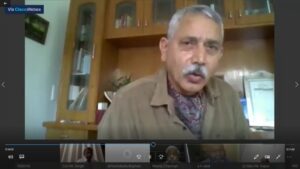 Col RS Sidhu, SM (Retd) – Some of the highlights of his talk were as follows:- 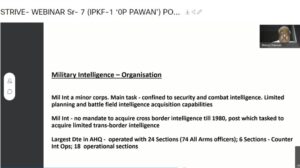 Col Manoj Channan (retd) – He addressed various elements of security and intelligence. Some of the important issues raised by the speaker were as follows:- 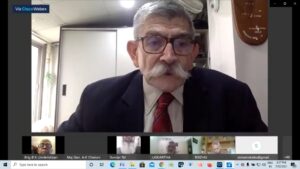 What did we achieve at such a heavy cost, needs to be answered and for that a revisit of this kind  (holding Webinar with those who were part of the operations) is necessary. One of the issues whose centrality was realized was ‘Military Diplomacy’. The GoI in conjunction with the Armed Forces needs to pay attention to this aspect.

Disclaimer: The views expressed are those of the respective author and do not necessarily represent the views of the organisation that they belong to or of that of STRIVE.