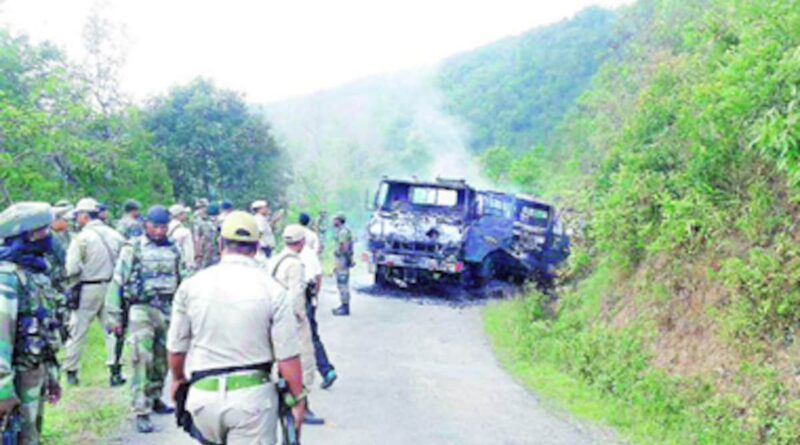 It’s not the killing of security force personnel in this ambush that has outraged the sensitivities of even the most contemptuous hearts and minds. What’s downright disgusting about this incident of unprovoked violence is that it extinguished the lives of the wife and eight-year-old son of an Assam Rifles commanding officer [CO] who were traveling with him. One entire family wiped out by trigger-happy terrorists is something that the assailants and their leadership can never justify, no matter what they say or claim; but more on this later.

Since attacks on security forces serve as a morale-booster for the rank and file of terrorist groups and is also perceived as a means to demonstrate their prowess to locals, terrorist groups are very quick in taking credit for the same. In fact, to fully exploit the shock effect of their cowardly attacks, terrorist groups even go to the extent of preparing statements well in advance so that their ‘success’ can be immediately communicated to the media, even before the establishment can take stock of the situation.

In this case however, even after it was officially announced that Colonel Viplav Tripathy, CO 46 Assam Rifles and four soldiers had been killed in the ambush, the perpetrators of this vile act took quite some time before taking responsibility. While this is rather unusual especially since terrorists were able to kill a CO and four soldiers, it does suggest that even the leadership of the proscribed terrorist groups [People’s Liberation Army, or PLA, and Manipur Naga People’s Front, or MNPF] that took responsibility for this ambush were initially hesitant in accepting responsibility for an act that claimed the life of innocent women and an eight-year-old child.

Given the fact that the terrorists had planted an Improvised Explosive Device [IED] to blow up the leading vehicle and thereby block the narrow road so as to trap the CO’s vehicle clearly suggests that it was a pre-planned ambush. This in turn indicates that the terrorists were aware of CO 46 Assam Rifles scheduled move plans, and herein comes the twist.

In a joint press release Deputy Secretary, Publicity of Revolutionary People’s Front [PLA’s political wing] Roben Khuman, and Secretary, Publicity, MNPF Thomas Numai, claimed being unaware that the CO was being accompanied by his wife and son. They also pontificated that “Indian security forces should not bring their families to a place which has been declared by Government of India as a disturbed area.”

However, this unsolicited advice is patently a desperate attempt to divert public ire from the unpardonable killing of a lady as well as an infant and is obviously based on media reports that CO 46 Assam Rifles, who was accompanied by his wife and eight-year-old son, were returning to the battalion headquarters after visiting a forward company base when his convoy was ambushed.

However, ‘The Bharat Express News’ has been more specific regarding the exact nature of this move by mentioning that “Terrorists attacked the convoy as the colonel of Assam’s 46th Rifle Battalion was going to oversee a civic action program in Churachandpur, on the Myanmar border.”

With this input, things fall in place. Civic action programmes to empower locals living in remote areas are integral to the Assam Rifles charter and for ensuring that these projects meet the genuine aspirations of the people, wives of officers do accompany their husbands to get honest feedback from the local womenfolk.

So, there was absolutely nothing unusual in the wife and child of the CO accompanying him on a civic action-related visit to a remote area. Furthermore, when the wife of an officer is accompanying him, advance information by the concerned company operating base is given to the locals to facilitate interaction with a greater number of women in the village.

Since interaction between wives of Assam Rifles officers and local womenfolk is solely to identify problems being faced by locals living in far-flung areas so that appropriate facilities to improve their quality of life can be provided. As such interaction has no overt or clandestine association whatsoever with any anti-terrorist activity and is a public affair, in the North East’s long history of terrorism which dates back to more than six and a half decades, never has a security force convoy with women and children ever been attacked by any terrorist group before.

That’s why the PLA and MNPF’s contention of knowing that the CO would be visiting the site of the civic action project, but being totally unaware that his wife and child would be accompanying him, is absolutely implausible as this would have been common knowledge. So why did PLA and MNPF cross the redline by attacking an Assam Rifles vehicle convoy that had a woman and child on board?

While no logical reason comes to mind, considering its timing, there’s a distinct possibility that PLA [Manipur] may have been directed by its patron [China’s PLA] to ‘trigger’ asymmetric warfare in India’s North Eastern region to weaken India’s resolve in standing up to Beijing’s belligerence along the Line of Actual Control. Since China has been aiding a host of terrorist groups operating in North East India, it can easily orchestrate an adverse internal security situation through these proxies.

Five and a half hours after the convoy of CO 46 Assam Rifles was ambushed, a person calling himself Hu Xijin [Twitter handle @HuXijin_GT] and claiming to be from “China state-affiliated media” tweeted “While Indian social powers play with the Taiwan question, they must know that we could support separatist forces in northeast India and restoration of Sikkim. These could be our potential retaliation cards. Indian nationalists should be self-conscious. Their country is fragile [sic]”.

Though this tweet cannot be taken as conclusive proof of Chinese involvement in the November 13 ambush, but then, since it clearly spells out an option that’s extremely viable, neither can its possibility be ruled out. Therefore, while the probability of a collusive Sino-Pak conventional threat to India in the near future may be extremely low, the likelihood of Beijing and Islamabad escalating the level of asymmetrical warfare in North East India as well as J&K remains a distinct possibility.

So, along with ensuring enhanced security along the borders with China and Pakistan, India needs to synergise its armed forces, paramilitary and central armed police forces to ensure the sanctity of our territorial integrity as well meet a collusive threat to our internal security.

Nilesh Kunwar is a retired Indian Army Officer who has served in Jammu & Kashmir, Assam, Nagaland, and Manipur. He is a ‘Kashmir-Watcher,’ and now after retirement is pursuing his favorite hobby of writing for newspapers, journals, and think tanks.
Disclaimer: The views expressed are those of the respective author/ speakers and do not necessarily represent the views of the organisation that they belong to or of that of STRIVE.
Article Published in Eurasia. Review…