The Russia – Ukraine War is the biggest war to happen in Europe since World War 2. After Russia spent weeks building up a military force along its border with Ukraine and in neighbouring Belarus, Russian leader Vladimir Putin launched a Special Military Operations on 22 February with the triple aim of first, preventing Ukraine from joining the NATO, second, demilitarization & denazification of Ukraine and third protecting the people of Eastern Ukraine from the genocide being committed by the Ukrainian military and ultra-right-wing Azov fighters. On the other hand, the Western world and Ukrainian officials described the conflict as a “full-scale invasion” by Russia of a sovereign country. It marked the start of a new grim chapter in an ongoing eight-year-old conflict with a major escalation of hostilities. Needless to add that this ongoing conflict has already claimed thousands of lives and major destruction in Ukraine, particularly in the Donbas region of Ukraine. 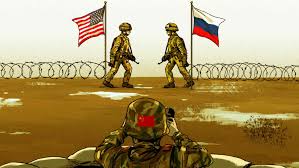 The conflict between Russia and Ukraine is an outcome of an ongoing great game between NATO (read the US) and Russia. This great game is using the geopolitical, cultural, ideological, and economic dimensions of international relations between the various stakeholders such as the countries of Western Europe, countries formed after the break-up of the USSR in 1990 and erstwhile Warsaw Pact countries. If the war continues, it may have a deeper impact on global security through its spillover effect and interconnected economic dimensions between the countries of the world. India though currently managing to temporarily tide over the global geopolitics through its strategic autonomy positioning in the UN and other international bodies like the UNHCR but will be required to revisit its options in the long run. Indian economy is already getting stressed with the oil prices hitting the roof with its cascading impact. The rising prices of the commodities have compelled the Indian Government to ban the export of Wheat in the face of rising international demand for wheat by countries that were wholly or partially dependent on the Ukrainian wheat with a view to improve the food security.

What is the Prognosis of the War? 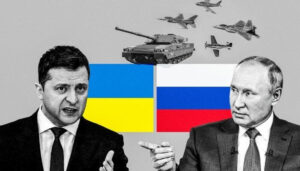 When the war began everyone thought that Russia will roll over Ukraine in a couple of weeks if not days and the war would end in Putin setting up a pro-Russian Government in Ukraine and securing the neutrality of Ukraine. However, as always perceived plans of Russia did not go as expected. It has been more than 100 days and the end appears to be nowhere in the sight. The Russian war objectives and related execution strategies appear to be constantly changing due to a very stiff Ukrainian resistance with the moral and physical support from US and the NATO. Firstly, in the face of determined resistance, the Russian Military withdrew from the outskirts of Kiev and refocused its attention on Eastern& Southern Ukraine, the Sea of Azov and the Black Sea. Defence experts have also justified this move as part of the deception to draw out the Ukrainian military northwards. Presently, Russia appears to be concentrating on consolidating her position in East, going for securing a linkage between Luhansk and Donetsk regions by attempting to capture Severodonentsk and block Ukraine from South by denying latter access to her ports in Sea of Azov and the Black Sea.  To see the position of the warring nation Russian as on the 85th day refer to the map below. 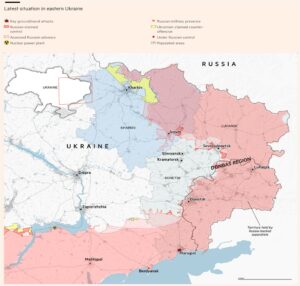 The war has prolonged contrary to expectations due to the unending military aid to Ukraine from the West and the US, amounting to almost USD 53 billion. The other reason is the surveillance and intelligence support provided by NATO to Ukraine. From the Russian perspective, Putin had said that Russia has not actually launched an all-out war and called its effort as ‘Special Military Operations.’ This has led to the limited deployment of Russian military power contrary to claims of Western Countries and Ukraine. This has given the necessary breathing space to Ukraine to mount a serious counter-offensive through a mix of guerrilla warfare and conventional attacks.

Another factor that has stood out in the war has been the war of narratives which are clearly running in favour of the West and Ukraine. The situation today is that Russia has neither won the war nor Ukraine has lost the war. A state of stalemate is the prognosis. It is dragging along in the face of a growing international energy and food crisis. Diplomatically too NATO continues to incite the Russians by weaponizing the grant of NATO membership to Finland and Sweden which will bring NATO on the doorsteps of Russia in the North thus threatening its security. It is a separate issue that the proposed membership of the two aspirants has run into trouble due to Turkey not playing the ball with other NATO members. It will also bring the nuclear war into focus although the chances of a nuclear war are unlikely given the catastrophic outcome of such a conflict. The Ukrainian conundrum appears complex and layered and confirms the old saying that it is “easy to start a war but very difficult to end it.”

The war has seen fighting in all the domains of a conflict. In the military domain, the Russian side has dominated the conflict through sustained missile strikes and mass artillery attacks backed by extensive use of mechanized forces. Russians are drastically short of infantry due to which the foot soldiers have been conspicuous by their limited employment by Russia. In fact, this has forced, Russia to have relied more on the Chechen fighters and PMC like the Wagner groups to fight their urban warfare battles. On the other hand, the Ukrainians relied more on guerrilla warfare and artillery ambushes on Russian troops using their man-portable missiles, rockets, limited Armoured fighting vehicles (AFVs) and artillery. Ukrainians had been preparing for a possible Russian offensive since the 2014 conflict in Crimea and Eastern Ukraine. They have prepared their defences using the urban area shelters and basements to a telling effect. The determined resistance by the Azov fighters and 36 Marine Brigades in the Azov steel plant complex is a brilliant example of such a tactic. Same tactics is again being used in Azot Chemical plant is severodonetsk.  Helicopters and drones have dominated the war in the aerial dimension with the Turkish drones Bayraktarplaying havoc with the Russian Armoured Columns and even in the maritime skirmishes in the Black Sea. However, a stage has reached when Ukraine is feeling the pinch due to shortage of infantry. Even the Russians have used their drones very effectively to strike the ground elements of the Ukrainian Armed Forces. The Russian Armed Forces also expanded the war into the maritime domain to seize Ukrainian ports and block the Odesa Port along the Black Sea with the aim of making Ukraine a landlocked country which would be at the mercy of Russia also blocking the export of Ukrainian Wheat, Corn, Coal, fuel & petroleum products, chemicals machinery, transport equipment and flow of military aid to Ukraine. As a result of this, the exports by Ukraine fell drastically to USD 2654.10 million in March 2022 from USD 5430 million in February 2022. While this effort of the Russians is on track the sinking of the Moskva the Flagship vessel of the Russians in the Black Sea fleet dubbed as the King of the Black Sea has dealt irreparable damage to the Russian combat power and its image of a superpower. Russians while keeping their supremacy are suffering steady losses of tanks and Mechanised Vehicles. This is a cause of worry to India as well, since the majority of the weapons used in the war are of Russian origin and India holds a large amount of these weapons there is a need to do a deeper analysis. However, for this, we need to wait till the warring side reveals more details from the battle zone. The military dimensions assume significance for India as it has inimical countries along its Western and Northern borders. This assumes major significance for India as, like Ukraine which must fight its own war, India too will have to be self-reliant in securing its country against any external aggression. India will face more difficulties in any future war as it is unlikely to get an unconditional supply of arms and ammunition, unlike Ukraine.

Non-Traditional Aspects of the War

As highlighted either side is fighting the war in the diplomatic, information and economic. In the economic domain, the West has imposed sanctions to the extent that Russia today is the most sanctioned country in the world. Yet it is surviving given the dependence of Europe on Russian oil, gas, coal, food, titanium and palladium. In addition, it has blocked the export of Ukrainian Wheat, causing a global food crisis through attacks on the Odesa Port. If the war is prolonged Europe will suffer a double whammy of energy and food crisis which will have a severe impact on the rest of the world including India. The sanctions are not working at least in the short term. Similarly, it is seeing an information war at a scale rarely seen in the past. Major military powers including India must analyze and derive relevant lessons for offensive and defensive use of information operations in their war plans. NATO has also mounted a diplomatic war using the UN and other international agencies to isolate Russia and hasten the exit of Russia from Ukraine.

To know more about the implications and multi-dimensional aspects of the war and delve deeper into the impact from the perspective of the important stakeholders in the war, STRIVE India is organizing an online seminar on 19 June 2022 from 1100hrs to 1230 hrs. The objective of the Webinar would be following:-

The online Webinar proposes to conduct an in-depth analysis of the various dimensions of the Russia – Ukraine war with the following aims:

Theme and Sub-theme of the Webinar

Theme: Russia – Ukraine Conflict: There is more to it Than Meets the Eye!

Europe is seeing war for the first time after WW2 on its soil. The Ukraine war has the underpinnings of escalating into a third world war should there be the slightest irrational action by any of the players. The induction of Finland and Sweden may just be that trigger. Despite the rhetoric, thanks to nuclear deterrence, nuclear conflict may be a distant possibility. However, the ramification of the war on the future world order, the status of the G7 countries visa a vis China and the emerging importance of India, impact on the economic growth in the world due to the twin impact of COVID and war, are likely surge in defense spending by the EU are a few issues that need to be analyzed and action taken by the various countries of the world to ensure peace, stability and growth. The webinar intends to find answers to these vexed issues of the Russia – Ukraine war and share them with the environment to enable the policymakers in the corridors of power to act upon it.

Disclaimer: The views expressed are those of the  Team STRIVE and do not necessarily represent the views of the organisation that he belongs to or of the STRIVE.