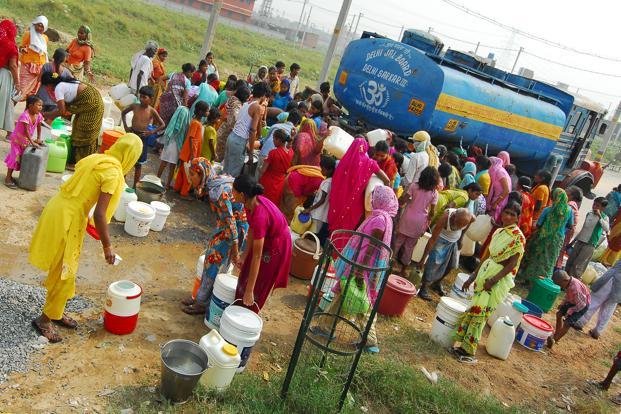 India is a water rich country with 4% of world’s water resources. But, India is also one of the most populous countries in the world, which supports about 17.1% (> 1.3 billion) of world’s population and about 500 millions of livestock population that accounts for 20% of world’s livestock population. Booming economics, population growth and rapid urbanization have considerable impact on India’s water demand. Changes in the food consumption, lifestyle and land use pattern also play a major role in water requirement. Although, India receives plenty of water as rainfall during monsoon (average precipitation of 1,170 millimetres per year, or about 4,000 Billion Cubic metres (BCM) of rains annually or about 1,720 cubic metres of fresh water per person every year), however, due to lack of storage only a small percentage of that water is actually added to the reserve. The total storage capacity of  91 reservoirs of Central Water Commission (CWC) in India  is 161.993 BCM, which is about 63% of the total storage capacity of 257.812 BCM, which is estimated to have been created in the country.  In addition there are 3842 water storage structures available in India, having a cumulative capacity of 213.477 BCM. This shows that almost 88 percent of the rain water goes waste.  It would be relevant to note that at least five countries are having much greater storage capacity as compared to India. These are; Canada, China, Russian Federation; USA and Brazil. In all fairness all these countries have water resources which are far more than India, as such India is not doing badly. However, it needs to be noted that India supports 17.1 % of World’s population and  20% of the livestock of the world and that is where the problem lies and Indian endeavour has to be to conserve every drop of water.

In this regard another aspect that merits consideration for further analysis to address the mismatch between demand and availability is that while, as per the international norms, countries with per-capita water availability less than 1700 m3 per year are categorized as water stressed, with per capita available water of 1545 m3 India is definitely water stressed country . Studies shows that the projected per capita water availability will become 1401 m3 and 1191 m3 by 2025 and 2050 respectively and eventually India is likely to become a water scarce country.

Relevance of the subject is that the water security (universal sustained availability) is the bedrock of the food security which itself is very important for the peace and tranquillity with in the country finally, as such it becomes an important element in the national security matrix.

Water Resources of India and its Effective Management

Ground water– Ground water is a replenishable resource. Annual utilizable ground water resources in India is assessed to be  433 BCM. The main source of ground water is the recharge from monsoon precipitation, which is about 58 % of the ground water. Balance of 32 % is contributed through; seepage from canals, tanks, ponds and other water structures and irrigation. Among the states of India Uttar Pradesh has highest net annual ground water availability (~ 72 BCM) while Delhi has the least (0.29 BCM). In this connection it needs to be noted that agriculture, industry and domestic use, generally utilize ground water. One way to address the ever shrinking water table is the rejuvenation of the minor rivers and village ponds (this is one aspect which needs to be addressed on priority. Afforestation and statutory rain water harvesting needs to be strictly implemented- author’s comment)  .

Watershed Management– It is essential for the optimisation of the water availability in rivers, ponds and any other water holding structure. In this connection a great effort done by the Barabanki District administration in Uttar Pradesh, to rejuvenate Kalyani River during 2020 is a good case study. This rejuvenation not only helped the recharge of water table along the river but also helped to enhance the water storage of the rain water which otherwise would have caused inundation in the area. Availability of water also improved the micro climate of the area. This was done by deepening the alignment of the channel and also doing  small engineering interventions to ensure that  of the flow of the water is directed towards the channel. This flags, the need of identification of such minor channels and doing necessary water shed management to re-channelise  rain water towards the channel (It is understood that the state administration has identified 25 such minor rivers in the state and has planned to get them deepened them. Indeed a highly laudable step- author’s comment) . Reforestation of the catchment area will also help to arrest the rain water going waste in conjunction with the necessary water shed management. In mountainous terrain it has also been observed that encroachments near the springs which feed to the main channel of the river disrupt the flow of water into the main river and this interrupted water if not collected in a proper check dam may result into landslide due to increase in the hydrostatic pressure. This again flags the need for a better Watershed management.

Need for Desilting- Rivers in North India are generally glacier fed. The alignment and Height of Himalayas make the glaciers dirty glaciers and as such plenty of silt is brought down by these rivers with them. This excessive silt causes changes in the cross section of the river from a trapezoidal section to a saucer section. This change, firstly; reduces water carrying capacity of the river and secondly also results into changing of the course. Thus there is a need to do two things, firstly; to do desilting of main channel regularly (may be an independent authority is constituted, which takes action Suo Moto- author’s comment)  and secondly; ensure that river plain is not encroached upon, because it is important for the health of the river and also to reduce the probability of the pollution of the river.

Selection of Crop, seeds and best practices in Agriculture–

Projection for Future– On account of rapid economic and demographic change, the water demands in all the sectors are increasing. According to the projections by the National Commission on Integrated Water Resources Development (NCIWRD) the irrigation sector alone is going to need additional 71 BCM by 2025 and 250 BCM of water by 2050, compared to the demands of 2010. Similarly other sectors are also likely to have increased water demand. As explained earlier a considerable amount of water requirement is met by the ground water. This is where, the problem is brewing up, a long term analysis of water recharge in both pre-monsoon and post- monsoon seasons shows lowering of water table due to limited recharge (we shall examine the reasons for reduced recharge in next section– author’s note!). If this trend continues, India is going to face huge water deficit in future, especially in the irrigation sector. In the domain of water usage by individual per capita, the water use is projected to increase from 99 litre/day (l/d) (2009) to 167 l/d (2050). Average domestic water demand would also increase from 85 litres per capita per day (lpcd) in 2000 to 125 lpcd and 170 lpcd by 2025 and 2050 respectively. Total industrial water demand is also supposed to increase to 92 BCM and 161 BCM by 2025 and 2050 respectively.

Problem Areas in case of India

Mismatch in Spatial distribution– A significant issue is the mismatch of spatial distribution of available water with the population. Ironically less water is available where more people live. Other than rains, the melting of snow over the Himalayas after winter season feeds the northern rivers to varying degrees. The southern rivers, however experience more flow variability over the year. For the Himalayan basin, this leads to flooding in some months and water scarcity in others. The total water resources going waste to the sea are nearly 1200 BCM after sparing moderate environmental / salt export water requirements of all rivers. This water which is getting wasted out, can be utilized to irrigate those areas which get parched during certain period of time and under tropical climate lend themselves conducive for agriculture  throughout the year, provided perennial water supply is available to cater to the high rate of evaporation from the cultivated land. Thus, though the overall water resources are adequate to meet all the requirements of the country, but because of the gaps in the availability of water due to temporal and spatial distribution of water resources, agriculture activity gets limited. One of the recommended option to address the issue of season water supply is the interlinking of the rivers of India. However, it has to be planned in a judicious manner so that the environmental degradation is avoided. The recent decision to link Ken and Betwa is a step in the right direction. Also, it needs to be appreciated that in times to come the Food Security in India will be a major issue and that can be achieved only if the water availability is ensured; all through the year. Related issue, which needs to be addressed is the availability of electricity 24X7 for all 365 days. Which will be a spinoff of the river linking in the form of generation of hydroelectricity.

There is no doubt that water is life and with the rise in population, climate change and pollution it is going to get scarcer every day. Lesser quantity of water will affect food  security and social harmony. It will also result into mass migration, further exacerbating social tensions. Thus there is a need to conserve the water that we have, because quantity of water is finite. Also we need to think in terms leveraging technology to economise the quantity of water and building necessary infrastructure to improve the storage capacity. It needs to be noted that poor management with consequent outcome may be an important adverse factor in working out of the national power and that will definitely impact the national security matrix. Therefore it is important that these issues are discussed, debated and addressed at every level of the society, industry and the governance mechanism because it is the concern of each one of us.