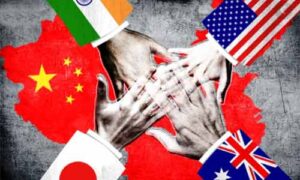 The Quad’s stated objective of ‘free, open and prosperous’ Indo-Pacific Region lacks the compelling bite, deterrence and collectiveness of a NATO

File image of a ministerial Quad meeting in Tokyo. AP

In 2007, former Japanese prime minister Shinzo Abe, then-Australian prime minister John Howard, then-US vice-president Dick Cheney and the Indian prime minister at the time Manmohan Singh, cut an odd picture. Three ultra-conservative hardliners, unabashed ‘nationalists’ and policy hawks on one side, stood beside a pacifist but pragmatic Manmohan in the same room. Personal governance styles aside, this eclectic leadership from the most distant points on a global map foresaw the dangerously expansionist rise of China, even before Xi Jinping had been promoted to the Chinese Politburo Standing Committee, let alone become Chinese ‘president for life’.

They started a dialogue that was rather unimaginatively and literally called the ‘Quadrilateral Security Dialogue’. The operative word in the expression was in the middle ie ‘security’, and not the geometric ‘Quadrilateral or Quad’ that has since become more fashionable. A lot was unsaid about its agenda, much was conveyed by its ambiguity and grouping, but a lot more was felt by its portents in Beijing. Murmurs of a brewing ‘Asia’s NATO’ were exciting, but it was still only in the first stage of ‘dialogues’.

Within a year, the George W Bush era was replaced by Barack Obama who initially punted on ‘historical opportunities’ of peace with China, Howard’s successor Kevin Rudd succumbed to a combination of Chinese protestations and charms, resulting in the cooking of the Quad on very low heat, just when Xi was steadily climbing the ladders of the Chinese Communist Party (CCP). Today, all four forewarning men of the formative Quad have demitted high offices owing to infirmities of age or politics. Nearly a decade-and-a-half later, the Quad ‘dialogues’ are still like a wilting wallflower in the background, exposing the vagaries and snail-paced changes in democracies.

The threat perceptions envisaged in 2007 were not wrong, they were only grossly underestimated, as Xi has since confirmed and accelerated all fears.

Donald Trump has handed over bitter US-China trade wars as transition dowry to successor Joe Biden, Xi has attacked Australia with cyber attacks, economic coercion and menacing language, whereas the Japanese are increasingly teased on the sovereignty of their islands with routine transgressions by Chinese war planes and naval ships. Amidst all this, the Indian armed forces are locked in a face-to-face standoff at various points along the Line of Actual Control (LAC). What was feared in 2007 is playing out in full display in 2021 — whereas, the reactionary and composite joint response to this threat is still in the form of ‘dialogues’.

The Quad’s stated objective of ‘free, open and prosperous’ Indo-Pacific Region lacks the compelling bite, deterrence and collectiveness of a NATO, which is to safeguard the freedom and security of all its members by political or military means. Therefore the Quad has remained practically ineffectual with multiple acts of Chinese belligerence like Doka La in 2017 or the continuing provocation in Ladakh region — with a supremely under-leveraged response for a notional Quad grouping with a combined pre-pandemic GDP of $30 trillion and a combined defence budget of $800 billion (four times that of China).

The Quad also jointly accounts for a mammoth and potentially-crippling 27.4 percent of all Chinese trade, yet the jointsmanship of the Cold War era response of NATO or Warsaw Pact blocs is missing, as if to suggest, that the threat from China has still not fructified? Never in history has China engaged militarily with the Quad countries so simultaneously and brazenly, as if it is in the full know that Quad will only remain mired in occasional dialogues among the disunited democracies.

The neologism and dare of ‘the Chinese Century’ stares in the face of future rules-based international order, and the United States in no longer in a position to counter the same, unilaterally. A coordinated security strategy among the directly impacted, viable and able (read: Quad) is the only workable counter, globally. However, while Delhi, Tokyo and Canberra have upped the ante and called for more meat in the Quad, the elephant in the room ie the newly-minted Biden administration, has an untested commitment on the same. However, despite the usually vacuous and mealy-mouthed diplomatese that accompanies White House statements, the latest one pertaining to the first Biden-Narendra Modi call carried the specificity of Quad.

‘The leaders agreed to continuing close cooperation to promote a free and open Indo-Pacific, including support for freedom of navigation, territorial integrity, and a stronger regional architecture through the Quad,’ it read. The potential talons of the Quad were unusually and reassuringly mentioned in the opening engagement. The ensuing backdrop of the Indian Navy’s largest war game, the biennial Theatre Level Operational Readiness Exercise (TROPEX) entailing additional battle platforms and resources of the Indian Army, Indian Air Force and Coast Guard, were in consonance with the air of preparedness.

This followed the Malabar Navy Exercise last year that simulated war games and combat manoeuvres with all four Quad countries (Australia joined for the first time since 2007); earlier still in the year came the more basic Passage Exercises (PASSEX) with Quad navies, individually. Clearly the itch, understanding and realisation is unmistakable to ‘formalise’ Quad more definitely, even if it were to fall short of a strictly ‘military alliance’ like NATO – but, paper awaits the ink to conjoin the sensitivities of Quad, formally.

The fact that the prevailing situation warrants a Cold War era reaction in the form of enabled and empowered Quad imperatives is confirmed by a clearly concerned China that has urged all Quad members to shun a ‘Cold War mentality’. For starters, even a restricted political and diplomatic congruence (as opposed to a military) to bind Quad more definitely would suffice, as any joint action by the same in multilateral forums would signal the meaningful checkmating of China — joint posturing of the alliance, is key.

One of the challenges to institutionalising the Quad is the collateral assumption of heeding to each other’s non-Sino urgency, which may or may not be aligned to the other members’ sovereign preferences eg Russia or Iran. The US should not assume India partaking of any potential punitive action against Iran (as Trump bullied his way into forcing India earlier with sanctions), as that militates against India’s own regional calculus and stakes — therefore for Quad to succeed, it is critical that it only entails containing China, as its sole mandate.

The commercial and diplomatic spin-offs of the Quad will be tangible and significant as the workings of ‘moral-democracies’ would dictate taking actions that are in consonance with the universal principles of liberality, pacificism and democracy — which are an inherent anathema to the illiberal, aggressive and communist China. The Quad is no longer an option, it is the only route, as all other alternatives to blunt Chinese aggression are mere sideshows. The other loosely aligned ‘bloc’ of the euphemistic West in the form of European Union, UK, Canada etc, would have no principal disagreement with the restrictive Quad agenda, and could only gain a powerful ‘shield’ through the same.

The longer the efforts to institutionalise, unwrite and define the specificities of China are put off, the steeper and more complex the challenge could become for the Sino-wary world. Ultimately it will boil down to the tenor, approach and decisiveness that the Biden administration decides to adopt — if he does go the Democrat way a la Obama era then history is doomed to repeat itself, painfully. However given that he served eight invaluable years as Obama’s vice-president and oversaw the growth of the Dragon’s overarching fangs owing to inconclusive ‘dialogues’, he would be expected to be more pointed, definitive and quick in playing the bind and force-multiplier, in the second Cold War era.

(The author is former Lieutenant-Governor of Andaman and Nicobar Islands, and Puducherry)