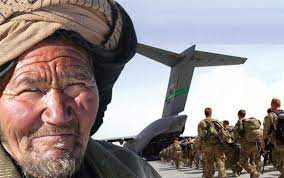 Since Washington never ceases waxing eloquent on how its actions are guided by lofty principles and high moral values, recent news reports of an alleged secret deal with its arch enemy Taliban must have come as a big shock to the uninitiated. Those unaware of Uncle Sam’s crafty ways would have been further scandalised to learn that under this deal struck in February last year, Taliban would provide protection to American troops deployed in Afghanistan against attacks by other terrorist groups. Even more galling is that Washington made this clandestine deal the cost of its main ally, the Afghan security forces.

Details of his deal [which has since dubbed the “Taliban ring of protection” 1agreement] have been revealed by three Western officials who are in the know of things to Reuters. However, Washington is maintaining a stoic silence on this issue and Taliban spokesperson Zabihullah Mujahid has declined to comment on the same. The reason is simple-as this deal tantamount to sleeping with the enemy, neither the ‘principled’ Americans nor the fanatical and uncompromising Taliban would like news of this deal becoming public!

Yet, even though the US and Taliban may be tight-lipped on this issue, other pointed conclusively prove that Washington has definitely entered into some self-serving [and not so honourable] arrangement with the Taliban. The first indication isAfghanistan’s National Security Council spokesperson Rahmatullah Andar going on record to say that the “[peace] agreement has only ensured [Taliban’s] cease-fire with the US, while relations between the Taliban and Afghans remained limited to killings, terror and horror.”2

The second indicator is that even though Taliban attacks against coalition forces in Afghanistan during 2020 have increased both in frequency and intensity, surprisingly, US forces deployed there haven’t suffered even a single combat fatality since February last year. Though a record in the two-decade long US war against Taliban, zeroUS combatant fatalities in Afghanistan for more than one year definitely can’t be attributed to providence or superhuman combat capabilities acquired by US forces overnight that roadside bombs, ambushes, sniper attacks and even suicide attacks couldn’t cause them any bodily harm since last February!

While Washington’s eagerness to get its forces out from Afghanistan is understandable, but entering into Faustian deals with the Taliban to facilitate this is most unfortunate, especially when it’s causing exceptionally heavy casualties to Afghan security forces. For example, two days after signing of the US-Taliban peace accord, Taliban leadership issued a letter ordering its fighters to resume attacks against government forces since “RIV [Reduction in Violence] has ended, “3and within a matter of just 96 hours, the Taliban carried out more than 75 attacks in 24 provinces across Afghanistan to build pressure on Washington to immediately release 5,000 of its fighters in coalition forces custody.

Despite going on a rampage that killed several Afghan security force personnel as well as many innocent civilians, US Secretary of State Michael Pompeo just paid lip service by saying, “violence must be reduced immediately for the peace process to move forward,”4and even though Taliban was blatantly violating provisions of the peace deal by continued attacks on Afghan security forces, he went on to assert that Washington would nevertheless continue to push the peace accord forward. Disregarding President John F Kennedy’s sagacious advice of not negotiating out of fear, the Biden administration too is apparently so apprehensive that the Taliban may walk out of this peace deal that it is actually negotiating out of fear- and there is ample evidence to prove this.

Recently, when US President Joe Biden announced a four-month and 11-day delay in the withdrawal of American forces from Afghanistan, an enraged Taliban gave vent to its annoyance by stepping up attacks against Afghan security forces and killing more than 100 soldiers in a matter of just two weeks! Yet, Washington still treated Taliban’s brazen belligerence with utter casualness that is evident from Pentagon Press Secretary John Kirbyreferring to the ongoing violence as just “small harassing attacks.”5Furthermore, by adding that these attacks “have not had any significant impact, certainly not on our people or our resources there and bases,” 6 he clearly exposed the extent of America’s unabashed selfishness!

Today America may express grave concern about the threat that radical Islamic terrorism poses to the entire world, but wasn’tthe US and Pakistan complicit in jointly creating thisFrankenstein? Hasn’t former Pakistan President and ex-army chief Gen Pervez Musharraf proudly admitted in various interviews that”In 1979, we [US and Pakistan] had introduced religious militancy in Afghanistan to benefit Pakistan, and to push the Soviets out of the country”? Hasn’t he flagrantly accepted that “We brought mujahideens from all over the world, we trained them and supplied weapons to them. We trained the Taliban, sent them in. They were our heroes. Haqqani was our hero. Osama bin Laden was our hero. Ayman al-Zawahiri was our hero.”7

From the beginning of its post 9/11 deployment in Afghanistan, Americanduplicity became more than evident. In November 2001, when the fall of Taliban held town of Kunduz was imminent, Washington secretly allowed Pakistan army to fly out hundreds of Taliban commanders and fighters along with Pakistan army military advisers and its Inter-Services Intelligence agents who were helping Taliban to fight US forces and Northern Alliance. Though Washington has denied that any such airlift took place, several reputed journalists like Seymour Hersh have confirmed the veracity of this claim after detailed discussions with several witnesses as well as high ranking officials in the know.

The clincher regarding the Kunduz airlift [also referred to ‘airlift of evil’] lies in a classified cable of November 29, 2009, released by Wikileaks. Addressed to Hillary Clinton, in this cable, former adviser to US President Sidney Blumenthal mentions that“I am in contact with him [head of CIA armed operations in Eastern Afghanistan Gary Berntsen], and have heard his entire story at length, key parts of which are not in his book, “Jawbreaker,” or in the Senate report. In particular, the story of the Kunduz airlift of the bulk of key AQ [Al Qaida] and Taliban leaders, at the request of Musharraf and per order Cheney/Rumsfeld, is absent.”8

President Biden has made out a strong case supporting US withdrawal from Afghanistan, which he calls a “forever war.’ Projecting himself as a President willing to take the bull by the horns,he has also dwelt on the philosophical by sayingthat “The war in Afghanistan was never meant to be a multigenerational undertaking.”9 However, it is almost certain that civil war will erupt in Afghanistan once coalition forces leave as Pakistan will leave no stone unturned to ensure that the not-so-friendly regime presently in power in Kabul is ousted and replaced by the more accommodative Taliban.

Former US President Donald Trump rightly summarised Pakistan’s duplicity in its ‘war on terror’ relations by observing that “The United States has foolishly given Pakistan more than 33 billion dollars in aid over the last 15 years, and they have given us nothing but lies & deceit, thinking of our leaders as fools. They give safe haven to the terrorists we hunt in Afghanistan…”10 However, while Islamabad may have bitten the hand that fed it, the Taliban never forgets an act of kindness. As such, it would certainly ‘repay’ Islamabad for generously hosting Taliban leadership and their families for over two decades.

It thus emerges that, unlike Washington, Islamabad has indeed chosen its ‘strategic assets’ well!