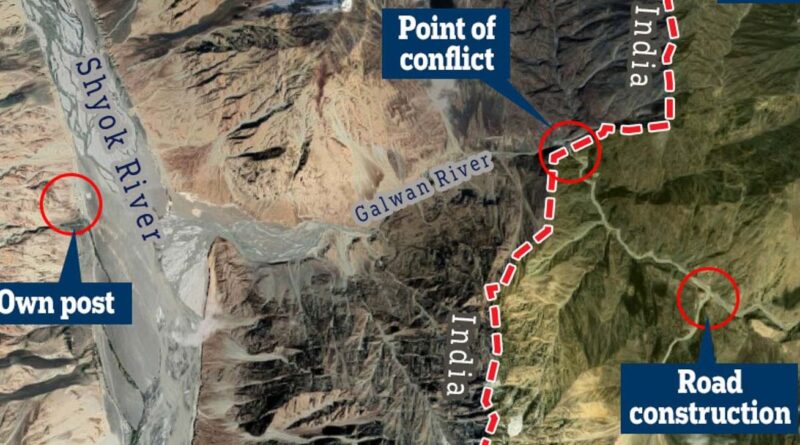 One of the intrusion by China in Eastern Ladakh in the summer of 2020 was in Galwan Valley, which later was a scene of a bloody clash at Y-Junction between Indian troops and troops of the People’s Liberation Army (PLA), leading to the death of twenty Indian soldiers and an undisclosed number of casualties on the part of PLA 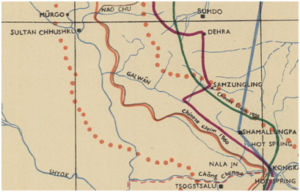 (Recently it was reported by the PLA Daily as quoted by the Global Times that Five Chinese frontier officers and soldiers stationed in the Karakorum Mountains had been recognised; Out of these four were posthumously; by the Central Military Commission of China for their contributions in the border confrontation with India, which occurred in the Galwan Valley in June 2021 . However, the Indian intercepts have revealed that the Chinese side had suffered 43 casualties; including dead and seriously injured in the violent clash.2).

While it is true that the Galwan Valley is part of the Chinese claim (East of Chinese claimed Line of Control (LAC)) but it was a matter of speculation as to why China chose this portion of LAC for intrusion. The answer came in next few days, when satellite pictures showed that China was trying to divert the waters of the Galwan River, an action contrary to its assurance that it would not block waters of south and westward flowing rivers. The satellite pictures highlighted the changing landscape of the valley with new tracks and river crossings coming up. Jeffrey Lewis, director of the East Asia Non-proliferation Program at California’s Middlebury Institute Studies commented that probably China was constructing roads in the valley and trying to dam the river.3 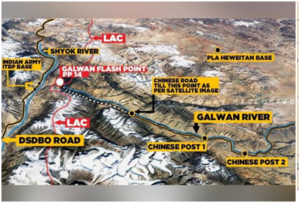 There is a need to understand the topography of the Valley to get a better perspective of the relevance of this valley in the overall strategic matrix of terrain. 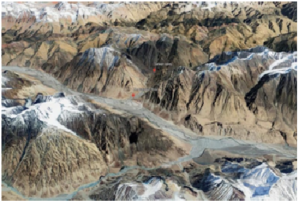 The Galwan River flows from the Aksai Chin region of the Union Territory of Ladakh which presently is under the illegal occupation of China. It originates near the caravan campsite Samzungling on the Eastern side of the Karakoram Range and flows West to join the Shyok River. The point of confluence is 102 km south of Daulat Beg Oldie (DBO). Shyok River itself is a tributary of the Indus River. As such Galwan river is a part of the Indus River system. Galwan river valley, named after Ghulam Rasool Galwan, an explorer from Ladakh, is considered a point of great strategic importance for both India and China. It provides a route across the Chang Chenmo ridge. The ridge line allows China to control the Shyok route passes, which are close to the river. China wants to control the area as it fears that India might end up threatening G-219 Highway connecting Tibet Autonomous Region (TAR) and Xinjiang in Aksai Chin by using Galwan river valley to its advantage. Relevance of India is that holding of it provides depth to Darbuk- Shyok- Daulat Beg Oldie (DSDBO) Road. This road runs along the Shyok River and is crucial for communication close to LAC and is a crucial connect between Leh and DBO. 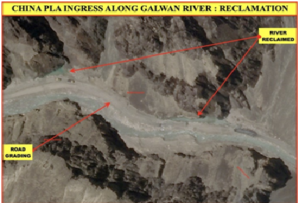 India is trying to build a feeder road here emerging from DSDBO Road. It comes up at Patrol Point 14 (PP14). The intrusion of last year in the Galwan Valley by China was to substantiate their claim over the entire Galwan Valley and the satellite imagery confirms that to substantiate their claim they had been making efforts to alter the course of Galwan River for a long time.

Satellite images of the Galwan Valley of 2010 vintage show that the valley was a very narrow one without any kind of road infrastructure. China started building roads in 2015-16, however, there was no troops deployment. In May 2020, the PLA troops moved into the Valley. Since adequate deployability was not available, PLA Engineers, dug the river deeper with a view to restrict the channel to reclaim the land for almost 40 km from the LAC, which runs close to the confluence of Galwan and Shyok. 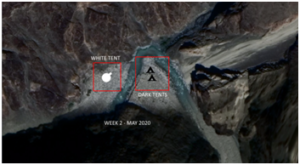 Aim of China was to reclaim land on the Northern side of the river and to avoid the need for constructing two bridges across the river. 4

Source: Abijit Iyer Mitra, “Chinese Intrusion lasted
for two weeks before it was cleared by Indian
Troops”, Pub in the Print dated 02 Jun 2020

China has great capability to reclaim the land. Incidentally, they have reclaimed about 32000 acres in South China Sea 5. This work of China could also be construed as her attempt to block the River with a view to use the stored water as a weapon to flood the Indian positions downstream. In this connection, an analysis of Map -5 and Map-6 would be relevant. 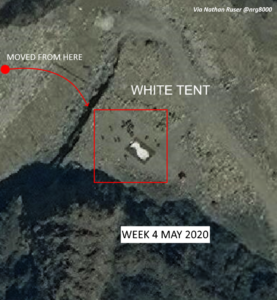 As can be seen in the Map -5; Up to second and third week of May, the Galwan river was seen to be in full flow. However, as seen in the Map-6, by the fourth week the flow had dried up completely, exposing the rocks in the river bed, indicating that the Chinese had stopped/diverted the waters 6.  Despite repeated Chinese assurances at several international forums that it would not block or divert waters of south and westwards flowing rivers originating in the Tibet plateau, China did block/ divert waters from the Galwan River in total disregard all these assurances.

This is a serious breach of trust and runs contrary to existing UN convention of 1997 for Trans border Water Channels. This also confirms that probably China was trying to weaponize water of the Galwan river or alternately deliberately drying up the North bank to create deployment space in the Valley. This tendency of the PLA to violate international conventions and going back on its promise needs to be contested. Chinese contempt for the rights of lower riparian states is quite evident in her reported constructing of a dam at Madev on Yarlung Tsangpo and also the construction of dams on Indus at Nagari, On Sutlej at Zada Prefecture, and 11 giant dams on Mekong 7.

The Chinese interest to occupy Galwan valley was because of its proximity to Darbuk- Shyok DBO (DSDBO) road, which PLA felt that they would be able to dominate with their presence in Galwan Valley. Besides attempting to reclaim the land by the PLA to improve deployment in the narrow Galwan Valley, cutting off the waters of the Galwan river also amounts to weaponization of waters of an international channel which China is attempting as an upper riparian and is violative of UN Convention of 1997 on Trans-Border Water Channels. If not challenged, this could lead to China getting emboldened to attempt similar exercise for many other trans-border water channels, which will have serious implications with respect to the availability of water for agriculture and drinking water in India and other lower riparian states like Pakistan and Bangladesh.

2. An ANI Report, ” However the Indian intercepts have revealed that the Chinese side suffered 43 casualties including dead and seriously injured in the violent clash. (ANI)” dated 20 Jun 20202

6. Abhijit Iyer Mitra, ““Chinese Intrusion lasted for two weeks before it was cleared by Indian Troops”, Pub in the Print dated 02 Jun 2020 and uploaded on https://theprint.in/opinion/chinese-intrusion-in-galwan-lasted-fortwo-weeks-before-it-was-cleared-by-indian-troops/428658/ 7 Philip Citowiki, “China’s Control of the Mekong”, pub in The DIPLOMAT dated 08 Jul 2020

Disclaimer – This disclaimer informs readers that the views, thoughts, and opinions expressed in the text belong solely to the author, and not necessarily to the author’s employer, organization, committee or other group or individual.