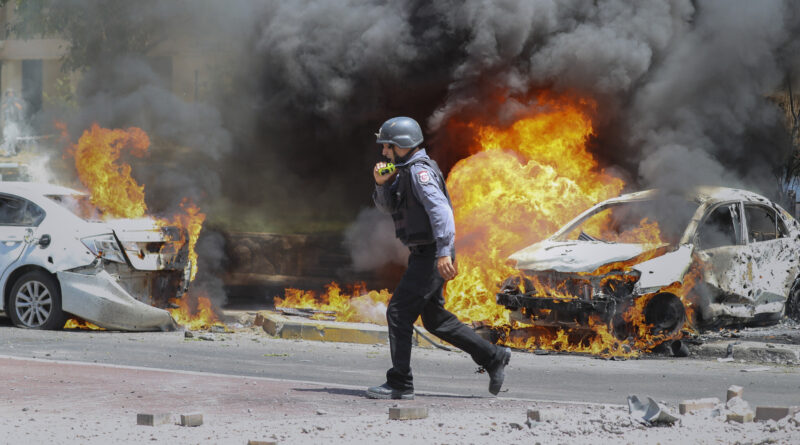 An Israeli firefighter walks next to cars hit by a missile fired from Gaza Strip, in the southern Israeli town of Ashkelon. AP

‘Muscularity’ never ends insurgencies, it needs sincere engagement, compromise within the expansive contours of the constitution and the ability to look beyond domestic political considerations

Yitzhak Rabin was the Israeli Chief of Operations of the underground Palmach (commando ‘strike force’) in the 1948 Arab-Israeli War, later as the Chief of the General Staff in 1964 he oversaw the stunning Israeli victory in the 1967 Six-Day War.

Post-retirement from Israel Defence Forces (IDF), the hawkish politician was the ambassador to the US, prime minister in the 70’s who ordered the famous Entebbe raid, defence minister during the turbulent 80s of the First Intifada – earning the infamous sobriquet of ‘bone breaker’ for his ‘Iron Fist’ policy and authorization of ‘force, might and beatings’ on protestors.

Yet, it was Rabin who drove the Oslo Accords, recognised the Palestine Liberation Organisation (PLO) and granted it partial control over Gaza Strip and West Bank. The right-wing parties like Likud (led by current Prime Minister Benjamin Netanyahu) within Israel and the Palestinian group Hamas had bitterly opposed Rabin’s rapprochement. The battle-hardened warrior turned politician had said, “We can continue to fight. We can continue to kill – and continue to be killed. But we can also try to put a stop to this never-ending cycle of blood. We can also give peace a chance”.

Through the accord, both sides legitimised each other with the Letter of Mutual Recognition and relative peace did ensue for a few years, but Rabin was assassinated by an extremist Jew who was believed to be influenced by far-right politics. Today, as violence flares up again in Israel-Palestine, yet again it is the same extremist voices led by the Likud and other far-right Israeli parties in the precariously poised Knesset along with the Palestinian Hamas, who are driving the mayhem.

Both Israel and India are home to some of the world’s longest-running insurgencies, except that India has the rare success of ending some seemingly intractable insurgencies, most notably in Mizoram, Assam and Punjab. Despite the global fascination and awe of the patented Israeli ‘muscularity’ of its body politic and sovereign instinct, the Israeli track record in resolving the Palestinian insurgency is an unmitigated failure, despite its irony commitment towards blunt force and expansionism (barring the few years surrounding the Oslo Accords.

Given the deeply polarising perceptions and with some genuine concerns of terrorism from the likes of Hamas, the ratcheting of ‘muscularity’ in the domestic politics of Israel has been especially gratifying. Typifying the narrative has been the recent statements from Netanyahu’s primary rival and supposed moderate – the Alternate Prime Minister of Israel and Minister of Defence, Benjamin Gantz, who in ‘competitive muscularity’ added that Israel, “will continue the attack on Gaza with full force”  and that, “this is just the beginning”!

Given that both Netanyahu and Gantz are in an unlikely coalition (with rotational prime ministership terms) with a razor-thin majority – neither of them can afford to be seen pitching for peace, not even Gantz, who was for peace talks earlier. Like in Punjab (and lesser extent in Mizoram), domestic politics and electoral aspirations to be seen as ‘muscular’, ‘unflinching’ and ‘tough on terror’ combined dangerously with some genuine socio-economic concerns of the local populace, to flare up into armed insurgency. The minority religious status in Punjab and Mizoram (like in Palestine) perversely helped majoritarian impulses that could be potentially harnessed for electoral harvest, in the rest of the country.

Whenever a conflict entailing ‘minority’ considerations is conflated to electoral considerations towards the rest of the country, perpetuating the ‘divide’ is easier and electorally rewarding – conversely, only when the national leadership acknowledges the underlying emotions, angst and genuine grievances without a preconceived notion or ulterior consideration, does the forward movement towards restorative ‘Peace Accords’, begins.

The Palestinian movement has regressed from a secular territorial dispute (with non-Muslim leaders like George Habash, Dr Hannan Ashrawi etc.) to a decidedly religious dispute hijacked by the absolutist and adversarial opposites like Hamas and the rightist-Israeli political parties. The unheeded memories of the socio-economic wounds and neglect during the great famine of Mizoram in the 50s, just like the ignored socio-economic underpinnings of 1973 Anandpur Sahib resolutions led to the natural gravitation towards the clerical order who spun the movement towards dangerous anchorage of religious sanctifications – the similar regression towards puritanism is visible with Hamas controlling the beleaguered Gaza Strip, whereas the relatively moderate and PLO-successor, Fatah, is left with the West Bank only.

Rabin’s foreign minister and successor Shimon Peres (after Rabin’s assassination) who played a key role in Oslo Accord said, “Making peace is not a simple endeavour. It is a constant struggle. But its complexity should not overshadow its purpose.”

The roadmap to peace in both Mizoram and Punjab (with Mizo Accord 1986 and Punjab Accord 1985) was not simple either with multiple assassinations and reneging from both sides – but it set the ball rolling for negotiations and thawing of emotions. Space was afforded to many who had partaken the insurgent movement, including the appointment of Laldenga as the first chief minister of Mizoram (today his then-deputy, Zoramthanga, is the chief minister!).

In Punjab politics too, various shades of accommodation and expression against ‘Delhi’ was visible in the Punjab State Assembly. In all, dignity, patience and compromise from previously held positions was enforced, and normalcy returned. The security steel was inevitable throughout the peace process – but it had been so for years preceding the same, the difference was that this time it was in conjunction with the political and socio-economic imperatives, which were missing earlier.

India had unprecedently and regrettably (and only once) used air power against its own citizens in Aizawl in 1966 – but it had taken another 20 years and far more cooperative means to end the insurgency in Mizoram. Lesson India learnt in its ending of insurgencies – security ‘muscularity’ is a must, but when deployed in isolation, it never succeeds. Also, the presidential expression can never be justified by comparing to that of a terrorist organisation like Hamas – the State of Israel need not ‘out-bully’ Hamas but take the high ground.

Importantly, the current flare-up was initiated by Israel and not Hamas. From threatening to evict Palestinians from their homes in Sheikh Jarrah neighbourhood to make way for the illegal Jewish resettlement to heavy-handed policing (using stun grenades and CS gas) during Ramadan in the Al-Aqsa mosque – Netanyahu baited Hamas into the violent flare-up, after cocking snook and roughing shod over the sacred site of a defeated community, by the more powerful Israeli force.

The death count of six Israeli fatalities to over 80 Palestinian fatalities initially, is self-explanatory. Gaza is facing the brunt in the face of a disproportionate show of strength, and international calls for a restrain notwithstanding, Netanyahu has upped the ‘muscularity’ populism. Many are fascinated by the videos circulating of the Israeli firepower and attack on Gaza and the ostensible ‘resolve’ and ‘spirit’. This provocative ‘anti-solutionism’ has gone on for decades, with peace as elusive as ever. The reactionary belligerence of the Hamas does not help matters, but an extremist organisation with no forward-moving engagement with the other side reacts irresponsibly and only adds to the bloodshed.

The Indian experience of winning peace with the formula of statesmanship, courage (thinking beyond electoral considerations) and the necessary security imprint in the background e.g. Rajiv Gandhi kept insisting that the government would come down with ‘extremely heavy hands’ in case the surrendered Mizo insurgents misbehaved, is the only template for peace, even if the optics do not look ‘muscular’. This multi-layered approach of compromise and accommodation ended insurgency in Mizoram, Punjab and Assam – as also, the same spirit disallowed the flare-up in South Africa post-apartheid, with Nelson Mandela’s Truth and Reconciliation Commission.

The inciting ultranationalist politics of Netanyahu had him lead a mock funeral procession featuring a coffin and hangman’s noose with protestors chanting ‘Death to Rabin’, days before Rabin was assassinated by an extremist-ultranationalist. Twenty-five years later, the longest-serving Prime Minister of Israel is upping the ante of ‘muscularity’ to strengthen his position, even as the Israel-Palestine conflict remains unresolved after over 70 years, with no hope for peace on the horizon.

‘Muscularity’ never ends insurgencies, it needs sincere engagement, compromise within the expansive contours of the constitution and the ability to look beyond domestic political considerations. Right now, Netanyahu is only doing ‘more of the same’ formula that has failed for over 70 years.