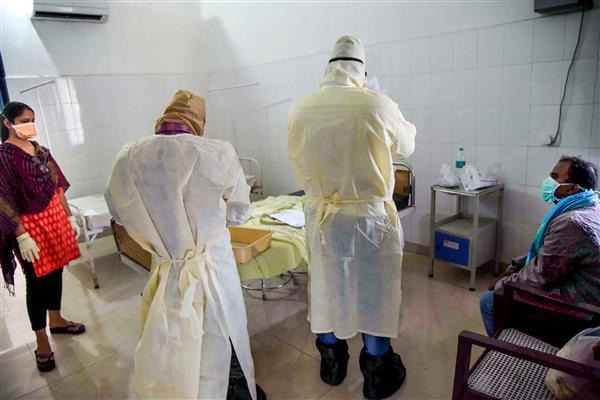 The Covid19 Pandemic has been ravaging the world with over three million dead globally. April 2021 has brought a calamitous second wave of the pandemic that is still raging (in May 2021), is now expanding to rural areas, Tier 2 and 3 towns and taking an immense toll. The efforts to combat the same are on a war footing. At these times of gloom, one is reminded of Bishop Desmond Tutu saying “…the Hope is being able to see that there is light despite all of the darkness.”

In many ways, the Covid19 Pandemic is an eye-opener, as the medical community is learning the hard way on the intricacies of the fast mutating virus, and constantly evolving contours of treatment. The Service Hospitals, the Armed Forces Medical Services (AFMS) and ECHS, despite being stretched to the maximum, have made all-out endeavours to provide succour and treatment to the Servicemen, Ex-servicemen (ESM) and the families. Inevitably the sudden, unexpected and massive onslaught of the pandemic left ECHS non-plussed and which led to critical deficiencies in ESM health care. It is necessary to learn from the past and present and extend an opinion for the ECHS, for the future.

Back in 2002, ESM availed medical facilities only for specific high-cost surgery/treatment for a limited number of diseases covered under the Army Group Insurance (Medical Branch Scheme). These medicare schemes provided some limited relief to the ESM. A comprehensive scheme named ECHS commenced from 01 Apr 2003. The rationale for ECHS was two-fold, to broad base and provide quality medicare to the ESM and to relieve the service hospitals which were unable to take the load of servicemen, ESM and dependents. Under this, ESM and their dependants who were only entitled for treatment in service hospital are now authorised treatment, not only in service hospitals, but also in those civil/private hospitals which are specifically empanelled. Conceptually, ECHS was to be managed through the existing infrastructure of the Armed Forces in order to minimise the administrative expenditure. The existing infrastructure includes command and control structure, spare capacity of Service Medical facilities (Hospitals and MI Rooms), procurement organisations for medical and non medical equipment, defence land and buildings etc. Simply stated, ECHS was to be dependent for primary treatment upon polyclinics (PCs) with laboratories and dispensaries, and for secondary and tertiary treatment upon Empanelled and Service Hospitals. The management was based upon a duality of command with functionality under the COSC through AG/ DGDC&W in Army HQ and for policy directions and financial sanctions under the Department of ESM Welfare (DESW), MOD.

Skip forward to a decade, ECHS commenced facing severe financial crunch. The dependencies increased greatly, billings of empanelled hospitals went through the roof! It soon became apparent that in the absence of Third Party Administrator (TPA) system followed by health insurance companies, there was over-hospitalisation (in-patient treatment) even for out-patient (OPD) cases, excessive and repeated laboratory testing. Invariably at the end of financial year (FY), there had to be allocations from the Army’s Revenue Budget to ECHS to have two ends meet, or there were carry-forwards payments that effected the next financial year’s allocations. It fell into a long drawn cycle of proverbial hand-to-mouth existence. There were many other as serious hiccups like the ECHS Card, strictures of CAG audit report, inadequacy of medicines in the dispensaries and rejections of treatment by the empanelled hospitals on delay in clearance of dues.

By 2016, the ECHS clientele had grown to over 50Lakhs, the number of PCs to 410, the empanelled hospitals to 2200 approximately and annual budget to Rs3500crores. The ECHS was increasing with 3 Lakh ESM and dependents annually. The Govt was debating medical insurance scheme or veteran hospitals. The Public sector Banks and Medical insurance companies approached to examine were not able to formulate effective schemes. Creation of veteran hospitals at select stations was also being debated in 2016, but shelved.

It is imperative to examine the mammoth exercise of providing medicare to ESM. This clientele could be split into various zones in India as follows:

It is appreciated that by the turn of 2020, the Primary members of ECHS were nearly 18Lakhs, and the dependents over 38Lakhs, making a gross total of nearly 56Lakhs. This figure may stabilise at 75Lakhs in another ten years. Meanwhile for the ESM, the PCs have increased to 428 and the empanelled hospitals across the nation to over 2700. The DESW ECHS revenue budget is as below:

First fallout of the pandemic was that empanelled hospitals generally refused to admit ESM – apparently for pecuniary interests. The PCs were stretched to the maximum, though in treatment protocol for Covid19, they had little role less providing referral to empanelled hospitals/testing laboratories. The latter provided minimal response to ESM treatment. ECHS bases all payments on Governmental rates as laid down, while the treatment in empanelled hospitals – largely up-market institutions, touched the roof (eg, Rs 1lakh per night in an oxygenated bed, and much more for an ICU). Many hospitals asked the ESM patients to cater for their own oxygen and drugs. The ESM had also to shuttle proverbial pillar-to-post for vaccination too. To be fair, the load on the public health system, which includes private hospitals, became unimaginably high, especially in the second wave in 2021, and all became chock-a-block full. As elsewhere in health care management in the nation, and in fact across the world, ECHS structural heads too remained reactive, at times to grave detriment to ESM health.

Without labouring on the issue, it is apparent that in ongoing scenario, with PCs unable to function optimally, empanelled hospitals raising their hands and the Service Hospitals pushed to the maximum, the ESM (without benefit of health insurance) had to face the wrath of Covid19, as also routine treatment.

To say that this pandemic was a Black Swan event, once in a lifetime, will be playing with fire! The likelihood of the third wave has been spoken of, and there is future management to be looked at. In the experience of the last 15 years, an immense amount of data has been generated and available with ECHS Central Organisation (CO). This data can easily be disaggregated, to tabulate typology of diseases that cost maximum, those the veterans are maximally inflicted with, the stations or places that are most hard-pressed with maximum catchment of ESM. To achieve optimal competence in the ECHS organisation, there is need for an oversight mechanism, a governing body of experts that checks and balances and propels the CO towards strong pro-action. Also a competence validation for this specialist field, for those selected at the Apex is mandatory.

Let, hence, medicare be segregated into three parts, one, primary treatment, laboratory services and issue of medicines; two, secondary or tertiary treatment that does not mandate hospitalisation or feasible as OPD, and third hospitalisation for secondary or tertiary treatment or IPD. It is imperative to envision how must this is executable. It is essential to offset the excessive reliance on empanelled hospitals in two-fold manner as, briefly, recommended in succeeding paragraphs. 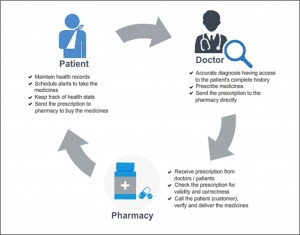 There is a need to fully automate procedure at the PCs and simplifies processes for ESM. This can be done by creating electronic medical records for ESM, accessible from the database maintained in central servers. There must be a system developed that improves the efficiency of Medical officers and quality of treatment. For ESM patients the system has to be tailored to make medicare at the primary level an easy experience. This systemic change should be automated and trigger referral process with should be real-time approval using digital signatures.

A schematic diagram can be:

In 2016, under the DG AFMS, veterans exclusive Cardiology and Dental Centres were created at CTVS and AHDC respectively, in Army Hospital (Research and Referral) in Delhi. This was to facilitate secondary and tertiary treatment in the fields of cardio and dental. Taking the initiative forward, it is felt that VSOC is created at ESM high-pressure stations.

These VSOC should be tailored as per the data available. As a generic guideline, the following specialities can be planned for veterans:

Endocrinology
Rheumatology
Nephrology with Dialysis
Ophthalmology
Onco-Medicine (Chemotherapy)
Cardiology
The all-important question is, where will the specialists and health workers come from? Indeed, Service Hospitals and staff will be unable to provide the medical cover. However, large number of AFMS super-specialists and health workers superannuate annually, and should be available. It will be necessary to fix suitable remuneration, comparable with market standards. It can easily be anticipated that excluding initial capital costs for establishing the VSOC and the medical equipment, the recurring costs will be considerably less than that being billed by the empanelled hospitals. With the statistics available, it is apparent that NCR (two centres – Noida and Delhi), Tri-city (Chandimandir and Mohali), Pune, Lucknow, Jaipur, Kolkata, Bengaluru, Jullunder and Jammu will certainly be eligible. This can be fine-tuned with data available with ECHS CO. Best will be to affiliate the VSOC with the regional/ nodal military hospitals, eg, at Base Hospitals Delhi Cantt and Lucknow, Command Hospitals at Pune, Chandimandir, Kolkata and Pune, and the like.

Tele-medicine is the in-methodology, and even ECHS has established a system for those home-quarantined in the pandemic. This will have to be firmed in permanence.

In the next phase, it is imperative to have Veterans Hospitals in the largest centres. It is appreciated that a 400-bed hospital would have the capital cost of establishing to be about Rs500cr. Depending on locations, these hospitals can engulf the VSOC, making it a seamless systemic. The locations and bed strength (including approximate hospitalisations at any one time in a station) can be worked out in sifting through ECHS data, and in consultation with AFMS. As initial establishment costs and yearly recurring costs are computed, and compared with the empanelled hospitals, VHs will be of immense advantage in the long run. Even if ten VHs are taken forwards in a phased programme, with VSOCs and VHs, nearly 80 per cent of ESM medicare can be undertaken. It is understandable that with the spread of ESM nationwide, total delinking from empanelled hospitals will be improbable, which will be a management issue.

In sum, the immense problems created by empanelled hospitals normally and most especially in the pandemic will be obviated. The ESM will be treated in comfortable environs largely by superannuated AFMS specialists. While the load on the Service Hospitals will be relieved, the VSOCs and VHs can also bank on Service super specialists for opinions if required. Most importantly, the armed forces will retain the responsibility of providing medicare to the ESM.

With hindsight, the transformation of ECHS is mandatory, sooner the better!

Author – Lt Gen (Dr) Rakesh Sharma
An infantry officer commissioned in Gorkha Rifles in 1977, with a career span of forty years. He has had extensive operational experience in Jammu and Kashmir, North East and on the Western Borders. The officer had trained the Botswana Army for three years in Africa, and attended the National War College at Abuja, Nigeria. Lt Gen Rakesh Sharma had attended the NDC at New Delhi and was Research Fellow at Institute for Defence Studies and Analyses. He has done PhD in Defence Studies. General Rakesh Sharma commanded the Fire and Fury Corps in Ladakh responsible for Kargil, Siachin Glacier and Eastern Ladakh – facing both Pakistan and China.The General was the Adjutant General of the Indian Army responsible for the Human Resource Management and superannuated in 2017. He has been awarded with Param Vashisht Seva Medal, Uttam Yudh Seva Medal, Ati Vashisht Seva Medal and Vashisht Seva Medal. He is a regular participant in seminars, lectures in various institutions, and regularly writes for newspapers and military journals. Lt Gen Rakesh Sharma was Chief Defence Banking Advisor with the Punjab National bank. He is currently DISTINGUISHED FELLOW with the Centre for Land Warfare Studies.