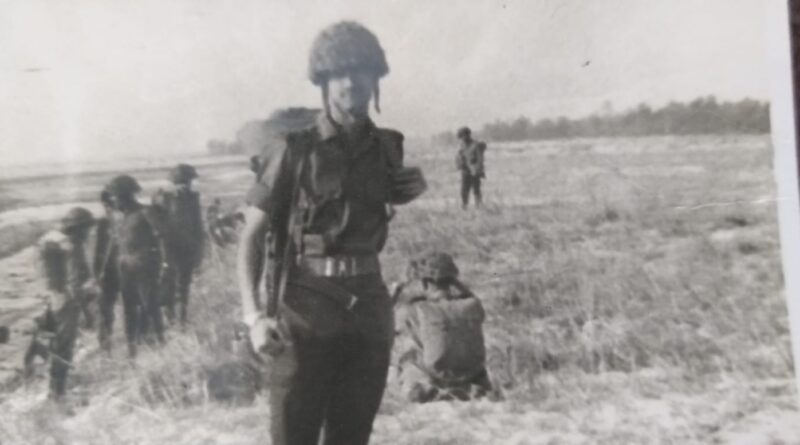 It was 11th of Dec and the war in East Pakistan was gathering momentum.

71 Mtn Bde was making steady advance along the Pachagarh- Kantanagar- Dinajpur axis, capturing or bypassing all the objectives till one of the battalions got badly stuck at the Kantanagar bridge. Two successive attacks failed to open the axis. Emboldened by their success the enemy further reinforced the bridge by moving additional HMGs and RCL – MMG teams.

The Div HQ at this stage decided to open a fresh axis to Saidpur via Khansama- Nilphamari instead of butting the head against an enemy firmly entrenched at Kantanagar Bridge.

Accordingly, orders were passed and a lot of reverse movements started taking place with some battalions withdrawing and some changing their axis of advance. My battalion was given the task of capturing Khansama and to open the new axis which we subsequently did and were awarded with the battle honour of Khansama and also the Theatre Honour.

But getting back to the story I had started.

I was the adjutant of the battalion and after the revised orders were issued, the CO tasked me to move all the F echelon vehicles of the coys and the battalion HQ on a particular route and establish the HQ in a certain area by 1700 hrs and dig in to face any jitter attacks by the Pakis.

The route on which this move was to take place was a very narrow village road , raised by about two feet on both sides to avoid getting flooded during the monsoons. I was in a tearing hurry to reach my location since the evenings used to set in early. What I was not aware, that the brigade HQ had also withdrawn on the same road earlier . So while negotiating a turn on the road I suddenly saw the brigade commander’s new caravan badly bellied on the side, blocking all movement on that narrow road.
Now, this was a tricky situation for me to handle and though some EME personnel were trying frantically to recover the caravan but it appeared almost an impossible task unless a recovery veh was pressed in.
So after making a quick assessment of the situation and as a young Adjutant adorning that almighty single star on my shoulder epaulletts, I called my JA ( Jamadar Adjutant) Inder Singh and gave him clear and precise orders that if the caravan was not recovered in the next ten minutes then it should be pushed down in the paddy field to clear the road. The glee on the face of Inder Singh on receiving the orders was a sight to watch. Sure enough, nothing happened in the next 10 minutes and to the utter horror and disbelief on the face of bde HQ Sub Maj, the caravan was toppled down in the field . Actually, it was quite a comical sight seeing a monster of veh lying all six wheels up in the paddy field.

I then moved on with my task and by 1700 hrs had deployed the Bn HQ and dispatched the F Echelon trucks to the respective company locations. 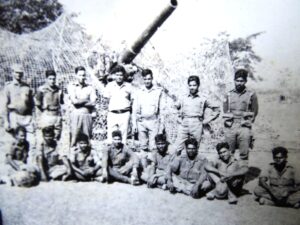 The CO returned at around 1900hrs after his briefing at the Bde HQ and I promptly updated him about the night deployment of the Bn and proudly told him that though the enemy did make two jitter attack attempts but we were fully deployed to give them a befitting reply with our automatic fire. CO was happy and complimented me for the task done well but while leaving for his tent, cautioned me to avoid going to the Bde HQ for the next 48 hrs since the Cdr was absolutely livid with me for what I had done to his new caravan. Obviously, the news had reached the Cdr by then.

The matter was soon forgotten as the war progressed and the incident was never mentioned.

Almost 40 years later this episode came alive again when a friend of mine Brig Jasbir Singh,SM of the Kumaon Regt came visiting his daughter in Gurgaon who lived in the same building as we. He was then writing the biography of Gen PN Kathpalia , our Cdr in the 71 war. During the evening while having a drink with me and being aware that my battalion was part of 71 Bde which the General had commanded during the war, he suddenly asked me if I remembered any incident during the war when one of the Bn adjutant had toppled the Bde Cdr’s caravan in the paddy fields, damaging it so badly that he could not use it ever in the war.
I was quite intrigued and amazed to hear this question first but then told him yes I did remember and that it was me who had had the privilege of giving that fateful order. I then asked him the reason for his query to which he mentioned that the General wanted to include that incident in the book that he (Jas )was writing. I was very happy to narrate the whole incident to him and Jas made some notes. The drinks got over and few days later Jas left for Ranikhet.

A couple of years later I had a chance meeting with Gen Kathpalia at the Ranikhet golf club one morning where he was sitting and having tea , dressed immaculately in a tweed jacket and his regimental tie. I recognised him immediately and
remembering my chat with Jasbir earlier in Gurgaon on the Caravan incident, couldn’t resist the temptation of opening that topic again with him. So I walked up to him, wished him, introduced myself, and then asked him if he remembered me since my battalion was part of his brigade for more than two years in Nagaland and then later during the war. He unfortunately had no recollection of me though he tried to pretend that he vaguely remembered. I then told him that I was the same ‘pipsqueak of an Adjutant’ ( the term he had used to describe the incident to Jasbir) who had ruined his caravan during the war which had made him very very angry. He suddenly sat up and said, “yes I do remember that incident and your battalion and also your CO that tall Ahlawat chapy.” I knew he would never forget my CO for reasons more than one but that story some other time.
Getting back to this meeting, I then politely told him with a smile that though it was rather late in the day to apologise for that misdeed of mine but I would still ask for his forgiveness. Gen Kathpalia laughed out aloud nodding his head and said “yes I will , though you had upset me a lot then”. He then called for some tea for me and we started chatting. Having poured myself some tea I then broached the subject of the Caravan again and mentioned that he apparently had included that little episode in his memoir and I was quite intrigued to know why he thought it to be worthy of finding a place in his book.
The General went into a bit of reflective mood and then said that he basically wanted to highlight the changes he had seen in the past couple of decades in the decision taking ability of officers in almost all ranks. Referring back to the incident he said that he was not sure if today even a commanding officer would have taken that action which a 2nd Lieutenant took 40 years back, without referring it back to the Bde HQs.

We continued chatting for some more time till his car arrived and then he left wishing me well in life.

I am not aware whether the incident finally got a mention in his book or not but
I was left wondering whether I should have asked him further as to who in the Army were responsible for allowing and accepting this change to have taken place and why.

Maj Gen Abhi Parmar VSM (Retd), was commissioned in Infantry (The Rajput Regiment) from IMA in Dec 1969.  He retired as General Officer and was part of his battalion in the 1971 war. He has served in Deserts, J & K, Sikkim, and NE and also on various appointments in different Formation HQs and Training Establishments.  He was Director-General  Indian Golf Union (2009 – 2014). He is Chairman, “STRIVE”, Think Tank,  after retirement and pursuing his hobbies, Golf, traveling and writing.