Joining the armed forces is a calling. An article in The Print of 24 March 2020 states, ‘According to available data, approximately 4 lakh people apply for NDA exams every six months, of whom approximately 400 are finally selected, which is 0.1 per cent of the total applicants.’ With a stringent Services Selection Board (SSB), after a written exam, only those who possess desired qualities make the grade. There are no quotas laid down for each batch at the SSB. The same article adds, ‘The SSB’s follow a scientifically established procedure to select candidates who possess and display certain important traits of officer-like qualities, leadership qualities, teamwork, self-confidence, group dynamics and such like which are essential characteristics of a military officer.’

Each youngster ultimately selected to serve the nation, would have within him the determination, courage, leadership and inner strength essential for his role as an officer in the forces. Once selected, he is put through rigorous training to enable him to fulfil his future responsibilities. The training includes physical and mental stresses designed to convert the individual from a civilian to a dedicated armed forces officer capable of leading from the front effectively, under extreme conditions, with confidence and composure.

Despite precautions, there are some who suffer unfortunate accidents, rendering them physically unfit for the forces. Their dreams are shattered, they are boarded out, to recommence their lives in a different career. Many suffer physical disabilities making them dependent on their families for support. In the past 35 years over 400 cadets from different military training academies have been boarded out on medical grounds, due to injuries obtained during training.

Of these, almost 50% of cases are from the National Defence Academy (NDA). These cadets are paid a lumpsum amount based on their disability percentage which was attributed to military service. They are also given a low ex-gratia payment monthly. However, they are not entitled to any other benefit despite being trainees for a Group A service.

The ex-gratia paid to boarded out cadets is lower than that entitled to those boarded out, on similar grounds, but undergoing training as recruits for assignment as future soldiers. Recruits boarded out are entitled to ex-servicemen status, while officer cadets were not. In contrast, all trainees of the Central Armed Police Forces (CAPFs) at every level, including officers, are authorised proper disability pension if disabled during training. Trainees for other central civilian services are granted similar benefits or retained in service in appointments where they can be suitably employed.

Another damage to NDA boarded out cadets is that these youngsters were pursuing their college degrees, while in the academy. Being boarded out implied re-commencing the same. This has been partially offset with the NDA having signed agreements with Faridabad-based Lingaya University and the Andhra University to enable students to continue without losing a term. Similar agreements are in the pipeline with other universities.

A case pertaining to a women officer cadet boarded out from Officers Training Academy (OTA), Chennai, would explain the insensitivity of the government. She was boarded out in 2010 and had approached the courts for rounding off her disability from 40 to 50%. The court in its judgement stated, ‘Having not yet entered the services and having remained only at the threshold, the petitioner cannot claim equality with those who have served the armed forces before misfortune hit them. The grant of more benefits to such members of the services cannot be extended to cadets/trainees as they have not served the armed forces but were only being prepared for it.’ Evidently, the government has different standards.

A committee formed by the defence minister, Manohar Parrikar, in 2015, slammed the government for its callousness. It stated, ‘Cadets who are disabled with attributable/aggravated disability and boarded out of training academies are granted a disability pension which is surprisingly not called a ‘pension’ but termed as a monthly ex-gratia award. This inane nomenclature has been conceptualized so that cadets could be prohibited from falling within the category of ex-servicemen.’ The MoD has been justifying its stand mentioning that cadets are not governed by Service Acts unlike recruits. Nothing can be more illogical.

The UPSC advertisement for armed forces institutes entrance exams mentions their selection as officer cadets under the army act. Training institutes for officer cadet’s function under armed forces acts and laws and do not follow their own rules and regulations. Thus, the MoD logic is flawed. Another insane reason is that a recruit on being ordered to join his training establishment is provided with a movement order from the nearest military Movement Control Office, which implies he is ‘on duty.’ The same is not adopted for officer cadets. This can be corrected with a simple official communication. That fact that it has not been corrected, implies complete laxity within the MoD.

In any case, if all central organizations can cater for those injured during their training phase, then cases pertaining to ‘officer cadets,’ needs correction. One of the reasons why these cases have never gained traction has been that numbers are fairly low to merit national attention. However, since these cadets received injuries performing official training implies that the government must take responsibility. What must the government do?

Firstly, they must be granted ex-servicemen status, opening doors for treatment in ECHS and service hospitals. Secondly, the grants made to them must not be termed as ex-gratia but pension and should be financially suitable to enable surviving with the disability. Thirdly, rather than leaving them to fend for themselves, the government must consider employment suitable for their disability, post their completion of education, as with other cadres. They could be employed in multiple central government organizations. Fourthly, cadets should be covered under relevant insurance schemes to enable additional financial support in event of any mishap.

The responsibility of caring for those injured in unfortunate accidents while undergoing training at military academies remains that of the government. There cannot be different rules for multiple central services. Will the Department of Military Affairs under the CDS take note? 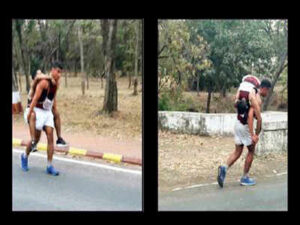