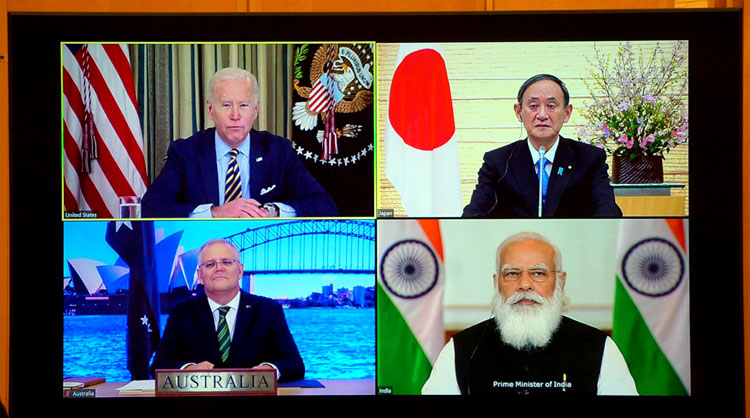 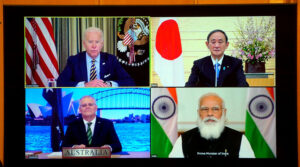 Spirit of the First Summit Talks

India was definitely the centre of attention due to its Vaccine Maitri initiative during the just concluded first summit level talk of QUAD. The group of four agreed to embark on a plan to enhance the vaccine manufacturing capacity to one billion. The spirit of the success of the meeting can be gauged by the messages coming out of the summit. They were in fact music to the ears of various democratic and progressive nations of the Indo-Pacific. Scott Morrison the Australian Prime Minister tweeted, “For us, this meeting is about how we keep Australia and the Indo-Pacific region we live in safe, stable and secure.” Prime Minister Modi tweeted, “SAGAR – Security and Growth for all in the Region (Indo-Pacific).” What is even more heartening to note is that the situation in the Eastern Ladakh along the LAC was also discussed which speaks of the broad based agenda of the QUAD. U.S. President Joe Biden amongst other things also stressed on “the commitment to ensure that the region is governed by international law and it is free from coercion.” The Japanese Prime Minister Yoshihide Suga said that, “We gained fresh momentum in October last year. I thank you for your initiative. With four of us working together, we look forward to a free Indo-Pacific region.” But what has come as an even more surprising development is the release of a joint statement by the QUAD countries for the first time in its history since 2007. The joint statement covered almost the entire spectrum of issues relevant to the Indo-Pacific. The spirit of the joint statement was encapsulated in these lines, “Today, the global devastation wrought by COVID-19, the threat of climate change, and security challenges facing the region summon us with renewed purpose. On this historic occasion of March 12, 2021, the first-ever leader-level summit of the QUAD, we pledge to strengthen our cooperation on the defining challenges of our time.”

Getting over the Birth Pangs

The QUAD security summit held in quick time preceded by foreign minister level talks on February 18, 2021 is a pleasant development as many experts were expecting a departure from the course which the QUAD 2.0 was taking in the Trump era, upon taking over the Presidency by Biden. But Biden surprised everyone by actually pushing ahead with the QUAD. The QUAD had never met at the summit level since its inception in 2007. 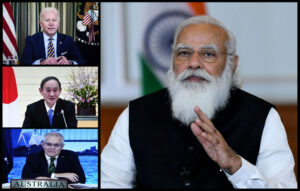 But the unexpected transformation has not come about without its birth pangs which go back to 2004 following the coming together of the US, India, Japan and Australia in managing a global crisis caused due to the unprecedented tsunami. Idea was then formally floated by the Prime Minister of Japan Shinzo Abe. This avtar of QUAD which many refer to as QUAD 1.0 died a rapid death due to the Chinese opposition and the deep economic linkages of the member nations of QUAD with China. Moreover, the US probably did not see the Chinese as a threat to their global supremacy. Alas this gave the Chinese an unfettered space to spread their influence right upto the 9 dash line in South China Sea, dominate the Senkaku islands in the East China Sea, develop its Navy with intentions of transforming it into a Blue Water Navy and establishing a base in Djibouti. Chinese rejigged their old archaic military into a modern war fighting machine by establishing Integrated Theatre Commands, reducing the foot infantry drastically and diverting the financial savings in building a modern Navy and Air Force. Chinese started displaying expansionist designs be it the Doklam crisis of 2017, display of aggressive intentions towards Taiwan or its forays in the SCS and ECS. These developments were backed by the now infamous BRI initiative which attempts to extend the Chinese influence economically across the globe through land and sea routes.

Thanks to COVID – 19, the initiative has come under some rough weather but the dragon continues to push ahead. These developments coupled with its bullying attitude towards Australia and Japan and its continued effort to create a crisis along our Northern Borders forces the four countries to revive the QUAD in 2017. Many refer to this as the QUAD 2.0. Since then the grouping has grown in strength and encompasses a range of activities such as participation in joint military exercises and working towards a peaceful world order based on international laws including economic and humanitarian cooperation. Unilateral assistance to the rich and the poor countries of the world with vaccine maitri initiative is a case in point. This has not only created an image of inclusivity of India in the spirit of “World is One” but also convinced the Biden administration of India’s sincerity towards a larger and nobler intention in promoting QUAD besides the security of the high seas and national frontiers of the various countries in the Indo-Pacific against the revisionist China. Many were expecting QUAD 2.0 to die a slow death given the way Biden was undertaking his election campaign and media reports emanating from various quarters. However, holding of a summit level talks within two months of his taking over as the President is a shot in the arm for the initiative and a clear message to countries that are opposed to the idea of a multilateral and a peace full global world order. The fact that QUAD has now transcended from official and ministerial level talks to Summit level, qualifies it to be termed as QUAD 3.0. 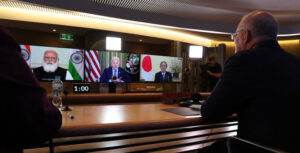 Chinese Challenge. The biggest challenge to this grouping will come from the Dragon, which has already touted this alignment as the NATO of the East and has said that it should not target a third country. In fact, on the heels of the QUAD summit, Chinese media has come out with a statement that “India will become cannon fodder for the U.S.” Global Times also states that “It seems India has failed to understand China’s goodwill. It is in fact, carrying out a kind of strategic blackmail against China.” This however, is far from the truth. India has consistently worked to usher in a peaceful relationship with China. It is China which has consistently backstabbed India creating an environment of distrust which became even more deeper with the Galwan incident. On the back of a pronounced anti-India stance, it has also failed to analyse its own actions, for example, China has established its own Quadrilateral Cooperation and Coordination Mechanism with Afghanistan, Pakistan and Tajikistan. Similarly, it has also established a Quadrilateral Cooperation with Pakistan, Afghanistan and Nepal. China has to respect the rule based world order and universal values or face international isolation with fewer friends and more enemies.

The biggest challenge to this grouping will come from the Dragon, which has already touted this alignment as the NATO of the East

Iranian and Russian Dilemma. This is more of a problem for India as it enjoys a healthy relationship with Iran and Russia. Besides, the two countries are also important partners of India for its energy and security needs. Their centrality in management of the Afghanistan situation is also a key driving factor which needs to be taken into account while positioning the QUAD with reference to these two countries. QUAD in general and India in particular have a problem here and we need to find a solution keeping national interest and geo-political sensitivities into account. 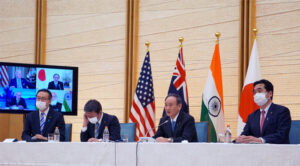 North Korean Challenge. The US has to deal with this rather volatile entity in the future. Chinese role becomes pivotal in managing North Korea. Hence, the US and also the other partners in the QUAD have to be sensitive to a possible development that may start an avoidable crisis. China enjoys a geopolitical advantage by having Pakistan, North Korea and to some extent Russia to leverage against the QUAD partners. In this game of international power play whether Russia will like to play a second fiddle to China is the only question mark but given its economic dependence on China one cannot rule out a cooperative approach of Russia in promoting Chinese interests.

The QUAD grouping must be a broad based one with security as a subset. Economics, climate change and rule based world order must form the basis of its future growth

To begin with, the grouping must be a broad based one with security as a subset. Economics, climate change and rule based world order must form the basis of its future growth. To make it a little more acceptable, other countries should be invited to join QUAD in the future such as Indonesia, Vietnam, Singapore, Philippines etc. The joint statement also alludes to such a step. Restricting it to a formation of democracies may narrow down its impact. It may also consider inviting France, UK, Germany and UAE as part of the grouping.

Its agenda must focus on collective action in humanitarian assistance and disaster relief, monitoring shipping for search and rescue or anti-piracy operations, infrastructure assistance to climatically vulnerable states, connectivity initiatives and similar activities. It must intervene if required militarily only in the event of an infringement of an international rule in the Indo-Pacific. However, it should not rule out an intervention militarily should any country try to impose an expansionist agenda be it on the land or the sea. The method and means of such intervention needs greater deliberation and should be worked out carefully. In the final analysis, QUAD has come as a window of opportunity for India to make itself count in the emerging multilateral world order or else it will be left behind. We must not forget the famous Chinese saying Wei Chi which means in danger also lies an opportunity. While the spirit of “World is One” (Vasudhaiva Kutumbakm) is an excellent approach, we must not forget the consequences of adopting Panchsheel. Similarly, in cooperation also lies competition and therefore, national interest and realism must remain the working principle of India’s geopolitics. 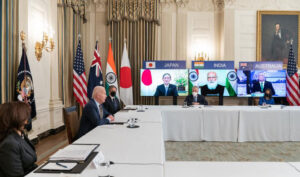