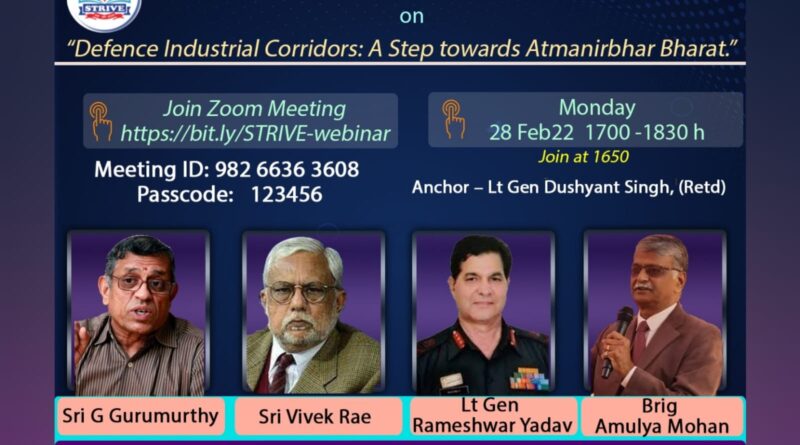 Atmanirbhar Bharat in the present global geopolitical context has assumed even more salience. Russian intervention in Ukraine which probably is the largest conflict since the Second WW 2 on the European Soil has posed several challenges to India especially related to the defence sector. Some of the defence projects/procurements that are likely to be affected are the Brahmos Joint Venture, delivery of S-400 rockets, AK 203 assault rifle project which is yet to take off due to bureaucratic hassles and Project 11356 frigates. Further due to our traditionally good relations with Russia we may have to remain neutral in the conflict thus jeopardising our procurements and strategic partnerships with various countries in the West including the all-important QUAD.

Atmanirbhar Bharat initiative announced by the PM following the COVID 19 pandemic has turned out to be the necessary evil that has now pushed India firmly on the path of Atmanirbharta. The 20-lakh crore initiative almost 10% of our GDP to promote Self-reliance announced by the PM on 12 May 2020 is a welcome step and covers several sectors such as defence, social sector, MSMEs, Agriculture, energy, migrant workers, civil aviation, and housing. The reforms include financial incentives to various sectors, legislative reforms, policy reforms and ease of doing business, especially for the MSMEs.

At the same time, the detractors of Atmanirbhar Bharat pose a counter that given the interdependence of trade in a highly connected world through digital and all forms of communication means self-reliance will only take us back economically and qualitatively. They have a point but is Atmanirbhar Bharat about absolute reliance or reliance in critical fields or sectors especially the defence, social sector, health, agricultural products, energy sector to avoid the consequences of Ukraine or COVID 19 type of situations.

To answer the challenges and way ahead in operationalising our Atmanirbhar Abhiyan and its influence on the road to self-reliance at the conceptual level, Sh. S. Gurumurthy a well-known Economist, chartered accountant and co convenor of Swadeshi Jagran Manch spoke on the “The Concept of Atmanirbhar Bharat and it’s need to enhance India’s Capacity”. Salient issuescovered by the speakers were as follows: –

He concluded his talk by once again stressing on the need to make the Atmanirbhar Abhyan a success through concerted and pragmatic efforts by drawing from our rich heritage of the past enshrined in our ancient literature such as Vedas, Gita, and Upanishads.

Thereafter, Mr Vivek Rae, former Petroleum Secretary, GOI and DG Acquisition in the MoD, GoI spoke on “Military-Industrial Complexes particularly the DICs, in improving the Defence Preparedness and make it independent of international restrictive regimes.” He highlighted on the following aspect of defence acquisition and procurement that would assist in making India Atmanirbhar in the Defence Sector: –

Overall, he suggested some very pragmatic steps to achieve indigenisation and emphasising the need to work seriously towards the privatisation of the defence industry.

Thereafter Lt Gen Rameshwar Yadav, PVSM, AVSM, VSM (Retd.) former DG Infantry, spoke onthe“Aspirations of the Armed Forces, the framework of the industry-user interface to ensure the readiness of the armed forces for the battlefields of tomorrow.”Salient issues highlighted by him included the doctrinal gap based on the revised threat matrix with orientation towards our Northern Borders and the need to reorganise and reorientate our strike forces accordingly. He also suggested upgrading our deterrence to cater for threats across the entire spectrum of the threat matrix. He further added that the defence forces desired a time sensitive procurement given the rapidity with the changes are taking place in defence technology and consequently the methods of warfighting. He suggested some measures to achieve indigenisation that would be in sync with the user aspirations. Some of the important measures were as follows: –

Thereafter Brig Amulya Mohan, SM, VSM (Retd.) and head the State Office of Society of Indian Defence manufacturers (SIDM) spoke on the “Progress of the DIC UP and the challenges which need to be addressed”. He initially gave out the role and charter of SIDM UP and its role in catalysing the establishment of the defence corridor in UP. He gave out the following progress on the DIC (UP):-

Several questions were asked. These pertained to the corporatisation of OFB, indigenisation vs import, impact of indigenisation and negative list on quality of equipment by Mr Sunil Pant, AM Tiwari, Lt. Gen Dushyant, and Maj Gen Sudhakar. They were mostly directed to Mr, Vivek Rae who stressed once again the need for certain compromises if we must achieve indigenisation given the security situation in the world.

Maj Gen AK Chaturvedi, AVSM, VSM (Retd.) Acting Chairman of STRIVE gave out the closing remarks highlighting the need for and importance of seriously working towards indigenisation. Conceptually, he highlighted the approach given out by SH, Gurumurthy to Think ourselves, Know ourselves, Be ourselves and Do ourselves. He also stressed the need for privatisation in the defence sector and seriously work on the introduction of the US System of Defence Contracting agency in India and the Make for India initiative. In the end, he thanked our distinguished guests, participants and Team Strive for making this webinar a success.

Happy listening to the Recording of the Program.

STRIVE Webinar Ser 11 on “Defence Industrial Corridors: A Step towards Atmanirbhar Bharat” was conducted on 28 Feb 2022 .

Sri Vivek Rae, former Secretary Govt of India, Petroleum and natural Gas, and former DG Acquisition Ministry of Defence. The scope of talk to include role of military industrial complexes, particularly the DICs, in improving the Defence preparedness and make it independent of international restrictive regimes.

Lt Gen Rameshwar Yadav, PVSM, AVSM, VSM (Retd)- The scope of the talk to include aspirations of the Armed Forces, the framework of the industry-user interface to ensure the readiness of the armed forces for the battlefields of tomorrow.

Brig Amulya Mohan, SM, VSM (Retd), state head, Society for Indian Defence Manufacturers and member STRIVE- Progress of the DIC UP and the challenges which need to be addressed.

Lt Gen Dushyant Singh, PVSM, AVSM (Retd)  An alumni of NDC, DSSC, CDM and Naval Post Graduate School California, USA. He has attended the Regional Defence Counter-Terrorism Programme with specialization in Terrorist Operations and Financing in the US. He has served as UN as Military Observer, an instructor CDM, Secunderabad. Served and Commanded in J &K also served twice in NSG,  Chief of Staff, Eastern Command, GOC  Corps and Commandant Army War College. He has also written chapters in two books namely, “Understanding Suicide Terrorism (chapter on Deterring Terrorism)” and “Countering Terrorism: Psychological Strategies (Chapter on Impact of Virtual world in Creation and Sustenance of Terrorism)”, by Sage Publication.He is a prolific reader, writer and a keen sportsman. He writes regularly in leading dailies and military journals