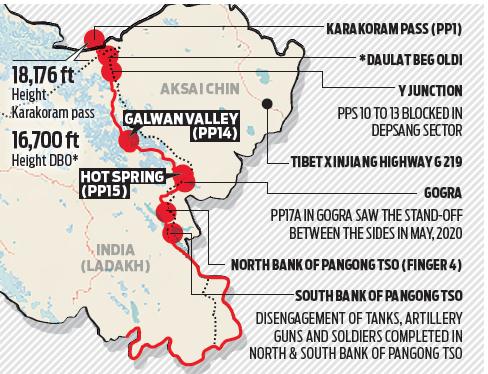 Apparently, and correctly, there is a reportage fatigue on Eastern Ladakh, because of the intensification and severity of pandemic and as post 11th Round of Talks at Moldo, in military coinage, there is NTR (nothing to report). Sporadic articles quoting ‘sources’ or analyses often tend to enliven the debate and bring the issue to fore.

Naturally, journalists follow due ethics of collecting and disseminating information – ensuring authenticity, and fairness, mindful of the cascading effect on the society, on individuals and institutions. Objectivity matters most on issues of national security, since those in establishment cannot complain or even rebut any subjectivity. Obviously, a story must be on facts investigated, detected and verified, and not only on a ‘reliable source’ or hearsay! Understandably there is a rightful sanctity about non-disclosure of ‘sources’ –many of who may have motivations. There are also focussed influence operations by the adversary. Obviously any responsible editor (or editor-in-chief) of respected news medium, must be seeking verification/ authentication. On matters Eastern Ladakh, especially the Sub Sector North (SSN), reportage is all hearsay, as none of the story-writers have visited the area and even interacted with primary sources (exceptions prove the rule).

Seeking a Meaning of the Imbroglio

There are four strands in the Eastern Ladakh imbroglio that have appeared in news-media recently that require examination. First is of Depsang Plateau, which is stated as pre-dating the 2020 standoff and that Indian forces have not been able to access their traditional patrolling limits, beyond Bottle Neck/Y Junction (on Raki Nalla) to Patrolling Points (PPs) 10, 11, 12 and 13 since 2013, that is a period of over seven years. Indeed, Depsang had witnessed a 22-day long stand-off in April-May 2013. In management of the LAC, patrolling to and domination of area of responsibility, including the PPs, are sacred and compulsive tasks for commanders and troops. In SSN, as elsewhere, patrolling is ordered and coordinated from Delhi (MHA and Army HQ), Northern Command in Udhampur and Fire and Fury Corps in Leh. In Depsang, a nearly 40-man joint patrol of ITBP and Army (including Ladakh Scouts) led by minimum two officers, is tasked for patrolling at fixed intervals – say once a month, towards PPs 10, 11 and 12, and 13. The patrols, with catchy, fancy names, have distinct tasks like maintaining sanctity, reinforcing own claims on territory, obtain information of terrain, information of any changes and in general dominate own areas. In addition, ASO / WASO (Winter Air Surveillance Operation) helicopter sorties are carried out in accordance with policy to maintain surveillance and domination.

It must categorically be stated that the patrolling had continued, as planned, since April/May 2013 stand-off, except when halted due to face-offs with PLA patrols or terrain conditions. Even post face-offs, commanders on ground would attempt to re-do the task at the earliest, sometimes within a day or two! This would imply that minimum of eight to ten patrols per year from 2013-2019, would have roughed in the most difficult of terrain and weather conditions for five to six days of patrolling of PPs 10-13. Patrols face detailed debriefings, and copious patrols reports are duly vetted up the ITBP/Army Chains. These patrol reports would exist even presently. It implies that cumulatively over 2500 all ranks from ITBP and Army must have touched base at the PPs at Depsang, from 2013 to 2019. In addition ASO/ WASO, some with senior commanders, undertake regular missions, along the Limit of Patrolling (LOP). To now state that we were not able to reach our LOP since 2013 as PLA was blocking our movement, is pure heresy, and challenging integrity and honour of devoted ITBP/ Army soldiers, units formations and commanders up-the-chain! In fact similar to own movement, the PLA patrols would have also been attempting and reaching their claim line, say at Track Junction (near DBO) or close to ITBP post at Burtse. In 2020, however, as per open source, there is mutual block either side of Bottleneck on Raki Nalla, thereby denying Joint Indian patrols to reach LOP, as also PLA patrols to come towards Burtse. The ‘source’ stating that, “…Indian troops are being blocked in Depsang “since before 2013 as well and after that”, most certainly mandates verification of facts.

Second is the issue that pertains to intelligence availability of “blobs’’ of Chinese forces on the Western Highway, about 150-200km and within 24 to 36 hours movement to LAC. Though the PLA does exercise near Xiadullah (Sanshili or 30 Barracks – 100km North of Karakoram Pass) annually, the reference herein obviously is East of the LAC. Though this requires reconfirmation, any large military exercises placing ‘blobs’ opposite or in Aksai Chin have never previously been reported. As it is mostly the information on exercises is available in retrospective. Being a first, in case such intelligence was available, diplomatic and military channels should have sought veracity and intention from their Chinese counterparts. Local formations would have immediately undertaken enhanced posture or full operational alerts. This is basic of operational planning. Hence, this information too commands verification.

Third, is the issue of Gogra and Hot Springs and lack of further movement in disengagement. Indeed, the area of Tsogtsalu/ Chang Chenmo River Valley has been largely devoid of face-offs, despite regular patrolling to PPs/ Kongka La. With one of the least disputed portion of LAC, it was being opined that disengagement may be feasible. However the area to the West of Kongkala and North of Lanakla is the Huoshaoyun lead-zinc mine, Asia’s largest metals deposit and the world’s seventh largest, with recoverable reserves of nearly 19 million tons of high-grade zinc and lead. Exploitation of this mine will double China’s current supply of mined zinc. There may be an anxiety in China on the ongoing construction of the road from Phobrang to Hot Springs via Marsimikla.

Fourth is the issue of contemplating the end state planned by PLA in the 2020 multiple transgressions. Assuredly, by positioning of even the appreciated quantum of additional forces, two plus mechanised/ motorised divisions, in Depsang Plateau, and in Pangong Tso North Bank/ Spanguur Gap (Kailash Range), it is apparent that full-scale conventional war across the entire Eastern Ladakh was not envisaged by PLA. PLA may have planned to reach and hold the 1959 Claim Line, ‘without fighting’! Of the Chinese 1959 Claim Line, Mr Shivshankar Menon has explained in his book ‘Choices: Inside the Making of India’s Foreign Policy’s that the Chinese had “described (the LAC) only in general terms on maps not to scale”. Analysing occupation of even the perceived 1959 Claim Line in 2020, also PLA would have required larger forces, which may have had to undertake conventional combat with Indian Army units at many a place, and which would have escalatory connotations. In fact, the 1959 Claim Line, as per available information in open realm, even now is being denied in many areas including SSN or Chumar. The end-state for PLA could well have been intimidation as part of overall geopolitical signalling. By any other measure it could be considered as having fallen short.

That brings to fore the omnipotent question of what and how next? A significant change in management of LAC between PLA and Indian Army/ ITBP has been the Agreement post 10th Round of Talks at Chushul that led to phased, coordinated, verified and synchronised disengagement, North and South of Pangong Tso and in Rezangla-Richenla. As a first, a buffer area of approximately 6-8km has been created North of Pangong Tso that obviates the face-offs that had been happening often and led to brawls and fisticuffs. It also does not challenge the respective claim lines, leaving them for a future, and hopeful, movement on demarcation and delimitation.

Does this new methodology have direction for other areas of Eastern Ladakh? The terrain peculiarities and the conflicting LAC Claims are so diverse that templating a singular model, is not viable.With a verification regime in place, similar buffers with duly identifiable features on ground can be planned sub-sector wise. For example, in Hot Springs-Gogra Areas, and the Bottleneck (Raki Nalla), the buffer zone may be 500 -1000m and along Chip Chap River (DBO) or Chumar it could be 4km, and similarly in other areas. This will have to be decided mutually on ground, where troops are still in proximity with each other, and should not interfere with the larger issue of settlement of the demarcation-delimitation process under the Special Representatives and Working Mechanism for Consultation & Coordination (WMCC). In the larger ambit, the 2002 process of exchange of maps needs to be enlivened, and again, a sub-sectoral method, where no dispute exists, should be settled and put to rest, like in Himachal Pradesh-Tibet or Uttrakhand-Tibet border! De-escalation is mandatory, once trust is rebuilt with a graduated methodology!
To sum it, the prevalent cliché ‘trust but verify’, is as applicable to ‘sources’ intimating insider information! And to move out of the current imbroglio, genuine ‘out of box’ considerations will be imperative.

(The paper is the author’s individual scholastic articulation. The author certifies that the article/paper is original in content, unpublished and it has not been submitted for publication/web upload elsewhere, and that the facts and figures quoted are duly referenced, as needed, and are believed to be correct).