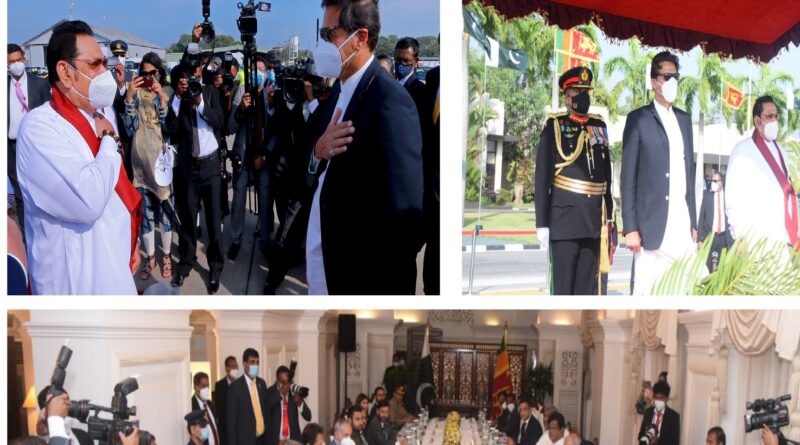 While the final outcome of the visit will be decided only on completion of the visit by the Pakistan PM to Sri Lanka, the indication till now suggests that the first round has gone to India.

Dawn, Pakistan’s leading daily quoting Foreign Office (FO) reported that “Mr Khan would visit Sri Lanka from Feb 23 to 24 on the invitation of Sri Lankan Prime Minister Mahinda Rajapaksa. He would be accompanied on the trip by some federal ministers and senior officials.

This will be Mr Khan’s first visit to Sri Lanka after assuming the office of prime minister. Mr Khan would be meeting President Gotabaya Rajapaksa and Prime Minister Mahinda Rajapaksa during the visit.”  Mr. Khan has his hands full during the visit. The bilateral talks would cover multiple issues including trade and investment, and defence and security. The paper went on to add that during the visit, the reconstitution of the Sri Lanka-Pakistan Parliame­n­tary Friendship Associa­tion will be announced to further promote parliamentary exchanges bet­ween the two countries.  Pak Premier would also participate in a joint Trade and Investment Conference.

But what has come as a surprise is that Sri Lanka has cancelled the address by the Pakistan PM to the Sri Lankan Parliament quoting Covid protocols. Covid protocol seems to be just a cover up. It is believed that Sri Lanka has cancelled this event since it was apprehended that PM Imran would have raised the issue of Kashmir and also the plight of Sri Lankan Muslims in Sri Lanka during his speech in the parliament. Mention of Kashmir in the Sri lankan parliament by PM Imran would have certainly annoyed India, especially since Indo- Sri Lanka relations have come under slight strain due to the cancellation of the contract to develop the East Colombo Port Terminal. The other reason was probably to avoid even greater embarrassment just in case the Pak premier would have raised the plight of Sri Lankan Muslims in a Budhist majority country. The Muslims in Sri Lanka have been agitating over the Sri Lankan government order insisting Muslims to cremate the body of a COVID affected death instead of burying them.  Muslims also feel that Budhst Monks are spreading anti-muslim propoganda and hatred amongst the common public.

Pakistan had enjoyed very robust and friendly relations with Sri Lanka in the first decade of the 21st Century as it had provided a host of defence weapon systems to Sri Lanka including MBRLS (Multi Barrel Rocket Launchers) in 2009 to crush the LTTE. The military to military ties were also very strong during this period with a number of Sri Lankan officers attending courses in Pakistan. Infact the current President was commissioned in Pakistan academy. China – Pak nexus during this period had managed to ensure that Indo – Sri Lanka relations remained at best luke warm. Therefore the cancellation of the Pak PM’s speech to the parliamentarian of Sri Lanka would have definitely embarrassed China. China has spared no effort to wean away India from its friendly neighbours either directly or through its proxy Pakistan. With China now firmly established in Hambantota port, any presence of India in Sri Lanka that too alongwith with its other arch rival Japan for Infrastructure development such as the Colombo Port terminal will adversely impact the String of Pearls strategy of China. It would therefore be in India and Japan’s interest to accept the alternative offered by Sri Lanka to develop the West Port Terminal instead of the East Port Terminal; especially when the Indo – Japan stakes in the project would be 85%.

The visit was also slated to discuss defence and security issues, however, there are feelers coming out of Sri Lanka that defence and security matters are not going to be taken up. If true this is a welcome development and once again will rattle China more than Pakistan. Pakistan is already staring down the barrel of FATF which is currently meeting in Paris to discuss its fate. Indian diplomatic efforts have more or less convinced the majority of the member nations barring few like China about Pakistan’s continued involvement in terror funding. Sri lanka would not like to be seen as actively involved with Pakistan in Defence and Security matters in this backdrop. Most indications suggest the likelihood of Pakistan continuing in the greylist, unless its all weather friend China pulls a rabbit out of its hat to convince the FATF members to take off Pakistan from the grey list on the 25th Feb 21. This leaves Pakistan with a very limited and rather unimpressive agenda to pursue with Sri Lanka during the visit. Even in the field of trade and investment, Pakistan has really nothing major to offer with its economy being heavily debt ridden and the World Bank and IMF restricting foreign aid. The only area was defence equipment, which seems unlikely to be taken up. It will once again be depending on China for any trade related deals and investments in Sri Lanka.

Hawkish and apprehensive attitude of Pakistan by continuously raising anti India rhetoric on Kashmir, internal affairs of India and upgradation of defence capability  of India is only bringing down its image in the eyes of the international community.  Unless it genuinely works to rein in the terrorists and stop the anti India rhetoric it will continue to remain in the grey list of FATF besides losing face. While the final outcome of the visit will be decided only on completion of the visit by the Pak PM to Sri Lanka, the indication till now suggests that the first round has gone to India. The visit is likely to not only demotivate Pakistani people but also unsettle China for having failed to secure its interests in Sri Lanka through Pakistan.

India scores another diplomatic coup by allowing the Pakistani Premier to flyover the Indian Air Space despite Pakistan having refused to do so for the Indian President’s (once) and the PM’s (twice) air crafts in the past to flyover Pakistani air space.