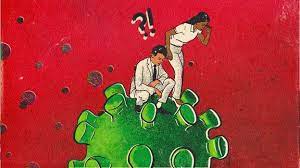 The Prussian General Clausewitz in his classic literary gem- On War, gave certain principles of realpolitik that has after almost two centuries stood the test of time.

The world since the onset of the Wuhan Virus of early 2020 has undergone a soft but tectonic shift impacting the nature of the lives of innocent citizens, civil societies, states, and the role of governments in times of political economies characteristic of global interconnected world systems.

The continental but soft changes to have impacted the societies and world around us include- global vaccine inequalities or vaccine nationalism, online educational platforms for a formal education sector lessening the moral and intellectual efforts of the learners, increasing greater efforts by the academics and a disproportionate reduction of salaries of employees specially pertaining to non-government sectors.

Structures of nation states have also been impacted, in particular, the thinning down of the preponderance of US Presidential Executive, with the controversial exit of Donald Trump. Economies of the world have shrunk, declined and job losses have become all too common. The world economy lost nine (9) trillion dollars since Wuhan Virus with emerging economies like India enforcing six months of national lockdown to balance public safety with economic cohesion.

The role of the People’s Republic of China within the ongoing period of the pandemic has many a lesson for regional and global governance and democratic systems. Within the liberal theoretical domain of democracies, freedom to think and act is among the cornerstones of being human. So present-day China has left no stone unturned to learn from past political events within the annals of the library of time.

The subversive policies of China to envelop India from the South China Sea to Gwadar Port of Pakistan under the String of Pearl’s theory, it’s an attempt to expand her illegitimate Tibetan territory by annexing Galwan Valley on May 2020, her economic grants with strings attached to the macro infrastructure projects like Belt and Road Initiative is but a leaf out of the lives of great scholarly masters like Tsun Zu, Kautilya, Clausewitz etc.

As the name suggests, the Wuhan Virus emerged as a pandemic through multiple outlets and means from mainland China from its Wuhan Lab to the inhuman, environment unfriendly animal-industrial meat market in Wuhan selling bat meat. What rings alarm bells in the intellects of democratic citizens is the noncompliance of the Chinese government to allow any investigation in Wuhan Virology Centre and the silence of the other members of UN G5- USA, France, United Kingdom and Russia.

The Socialist regimes like modern China sternly follow principles of classical warfare like Expose and Attack the Soft Flank of the Enemy, the Inner Front Strategy or Destroy from Within in which internal dissension is sowed and grown by way of finance or other means, utilise the weaknesses of the enemy and finally at an opportune time, stage a coup d’etat.

It makes us ponder whether the world community is analysing, taking note of the sudden coup d’etat of Myanmar, US Army exit from Afghanistan and the unholy camaraderie between China, Pakistan and Turkey since the onset of the Wuhan Virus.

Modern revolution in military affairs (RMA) became popular after the dramatic US victory in the 1991 Gulf War. Former US Defense Secretary, William Cohen defined RMA as ‘ when a nation’s military seizes an opportunity to transform it’s strategy, military doctrine, education, training and tactics to achieve decisive military results in fundamentally new ways’. The recent clash between Chinese astronauts aboard its Chinese Space station and two satellites of Space X owned by US tech billionaire Elon Musk in outer space is a pointer.

‘History repeats itself is a famous proverb known by one and all. The present anarchic world order under the nation state system since the pandemic can be corrected and lessons can be derived from past antiquity.

Biological warfare as a means of Asymmetric warfare to achieve political goals isn’t new. Wikipedia states that approx 1500-1200 BCE, Hittite kings used tularemia victims to move into enemy lands for causing an epidemic. British Army attempted to use Smallpox against Native Americans in 1763 at Fort Pitt, Germany in 1916 used Anthrax and Glanders in Bucharest to starve the Allied Services of Livestock products like Milk with the response by the Allies to spread the H1N1 Influenza A Virus or Spanish Flu to change the fortunes of World War I. China once again as a response to American War over Vietnam by Agent Orange, Napalm, etc, helped spread H3N2 Virus known as Hong Kong Virus resulting in sixty thousand deaths in East and West Germany between 1968-1969.

SARS- COV 2 and Omicron has brought into focus issues of traditional natural yogic living under Human Development Index parameters and democratic patenting of healthcare systems to be synthesized for enhancing the quality of life. Although the present Indian Government led by the NDA 2 and NDA 3 has done well to popularize Yoga as International Yoga Day since 21 June 2014, yet there are miles to go to make India a Centre of Harmonious Sustainable Nation of erstwhile “Vasudhaiva Kutumbakam” or natural living.

We can’t ignore the fact that Patenting system is designed to promote innovation and offer a mechanism ensuring fruits of innovation is accessible to society. But the recent data suggests that there’s large-scale global vaccine inequality in distributing Covid Vaccines between the Western and Eastern hemispheres of the world nation-state system. Nations like France and Japan have administered at least one dose to more than seventy-five percent of its citizens while South Africa has vaccinated only a quarter of her citizens with nations like Sierra Leone giving only 0.1 percent of her citizens, vaccines.

The politics of Obscurantism which began in the 16th Century German Politics to erase the Talmud as UnChristian heresy was used as a tool of Machiavellian realist realpolitik for political purposes. Somehow Obscurantism, since the dawn of Colonialism, has been accepted by governments to maintain its status quo or raison d’et at to pursue power. Although most governments use this tactic but modern-day China is a living testimony to this fact, as it is the least information friendly to any other nation or even her own citizens to maintain it’s Asian hegemonic status. The Democratic protests in Hong Kong since April 2019 over the One China Policy, extradition bill, large scale arrests of democratic crusaders by the Chinese government etc vindicate obscurantism.

Thomas Hobbes in Leviathan (1651), Plato and Chanakya or Kautilya did justify powerful leadership-driven monarchical sovereigns with the condition that there would be ethical-educational centers of social leadership like the Gurukul system of Vedic India. In return for the consent to govern, the king or leader or Leviathan was to secure peace and security of the governed.

Unfortunately, the era of Colonial conquests of the East by some of the Western nations, foreign invasions and cultural genocide of indigenous people and their way of life like Timur,  Khiljis, Mughals  and finally Sectarian centric Secular ideologies of governments as in India since 1976 has led to “extractive economic institutions” of a politico-economic nature by which the resources of the many is extracted by the few and for a few vote bank objectives, that fail to protect property rights or provide economic incentives for economic activity. In turn, such an extractive economic system is maintained by “extractive political institutions which concentrate power in the hands of a few, who prosper through such unequal economies to maintain their status quo and use available resources to cement their hold on political power”.

To correct such a situation we need to follow the example of Purity of Societies and Political systems as exemplified by Aristotle and Kautilya, train the element of goodness(practical knowledge) or ideal quality of human beings as conceived by Plato with modern government and leaders empowering the education sector, which would foster philosopher-kings not extractive exploitative unjust leaders, a plurality of ethical-political power concomitant with property rights, secured life and liberty of citizenry by a sound law and order system and an inclusive market economy. Alabama of USA holds key lessons before and after the pandemic era for emerging democracies like India to contemplate and move ahead towards a brighter future based upon a responsible and healthy contemporary scene.