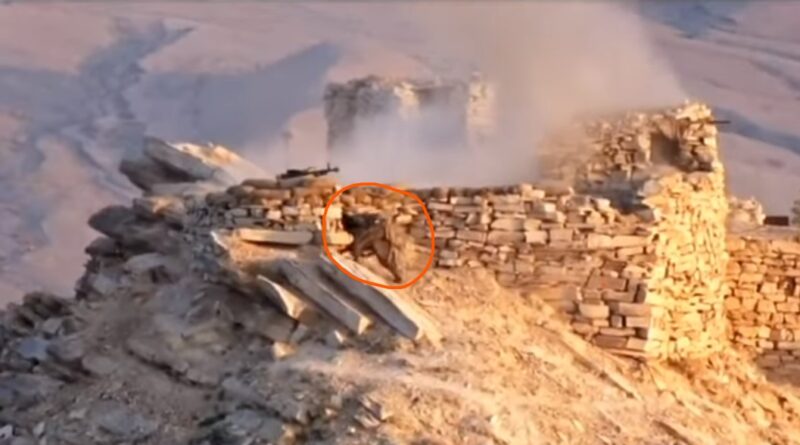 A recently published article (‘Inter-Services Public Relations’ Not So Subtle Art Of Story Telling’ ), convincingly exposed the Pakistan army’s media wing Inter-Services Public Relations [ISPR] proclivity for peddling lies. The incident in question relates to a press release of December 27, which mentions that the Frontier Corps [FC] post in Sharing, Harnai, Balochistan had been subjected to a “fire raid” the previous night in which seven FC soldiers were killed while “repulsing raiding terrorists.” However, a video of this incident subsequently released by the Baloch Liberation Army [BLA] reveals that this post was physically overrun by Baloch fighters and many soldiers could be seen abandoning the post after it came under attack.

In the last week of February, a few news portals published the news of the Pakistan army’s Kotri post in the Kahan area of Balochistan being attacked by BLA fighters. This news item was based on a statement issued by BLA, [which took responsibility for this attack and shared information of the same], and ISPR’s inexplicable failure to reject this claim obviously raised suspicions. As there is no mention of this incident in ISPR’s official ‘Army Press Release Archive’ [https://ispr.gov.pk/press-release-archive.php?cat=army], ascertaining the veracity of this news became difficult because while on the one hand, the BLA was making very specific claims, on the other hand, ISPR was maintaining a stoic silence.

Firstly, the very mention of a security force post being overrun by BLA sounds downrightly absurd. Secondly, the claim that well-armed and trained soldiers protected by formidable field fortifications fled the scene on being attacked by a ragtag force of irregulars, seems ridiculous. Thirdly, seven soldiers being killed in a single action during peacetime is no mundane occurrence. Hence, it’s inconceivable that the Pakistan army would be so inconsiderate to brush this humungous human tragedy under the carpet and thereby deprive fallen soldiers of the honour and respect they rightly deserve. However, there’s also a flip side to this line of thought.

While BLA may be guilty of exaggerating the number of casualties inflicted on Pakistani security forces, but it’s certainly not known for making outrightly fallacious claims. However, the same can’t be said about the Pakistan army because it has a proven history of delving into untruth ever since its very inception. After all, didn’t it try to pass-off army personnel as “tribals” during the 1947 invasion of Kashmir [Operation Gulmarg], as “razakars” [civil volunteers] during the 1965 war in Kashmir [Operation Gibraltar] and “mujahideen” during Kargil intrusions in 1999 [Operation Badr]? Is it not a fact that just in order to prevent loss of face, Rawalpindi went as far as disowning dead bodies of its soldiers killed during the 1999 Kargil war? So, to take the ISPR’s words [or even silence] on its face value, just because it is part and parcel of the army, would be a grave misnomer.

But even before the ink on the Sharing, Harnai post-attack exposé could dry, BLA uploaded another video on social media on March 13, 2021, containing graphic details of a daring daylight attack on the Kotri post. Titled “Baloch Attack on Pakistan Army post, 7 Pakistan army casualty, Balochistan (BLA),” [https://www.youtube.com/watch?v=W2vtZKzyV5g], it mentions the date of the attack as February 17, 2021, and time, “about 5.15 PM.”

The Kotri post-attack video, not only exposes ISPR’s obsession with falsehood but also reveals some very disturbing facets:

Based on the vast extent and defensive layout of Kotri post as seen in the video, as well as the huge cache of weapons seized by BLA [nine Heckler & Koch G3 rifles, one Dragunov sniper rifle, one Rheinmetall MG 3 machine gun, one 81 mm mortar and one 12.7 mm heavy machine gun and even a type 63 rocket launcher whose 107 mm rocket has devasting effects], a conservative assessment is that this post was manned by at least 20 soldiers.

So, with BLA claiming that seven soldiers were killed and five injured in the attack, eight soldiers [ out of the 20 soldiers present in the post] remain unaccounted for, and this lends credence to BLA’s claim that “several personnel of the cowardly army dropped their weapons and fled.” In fact, the overall lack of aggressiveness displayed by those present in the post [as evident from the video] could well be the result of the determined lot expectedly being demoralised after seeing their comrades abandon their battle stations and flee!

Videos of both the Harnai and Kotri post attacks [ on December 26 and February 17 respectively] clearly establishes the fact that contrary to ISPR’s portrayal of them as cowards, Baloch fighters appear to be highly motivated and extremely courageous. On the other hand, a perceptible lack of aggressiveness on the part of soldiers is evident from their reactions when attacked by Baloch fighters- a view that Rawalpindi may publicly reject but cannot afford to overlook.

ISPR may keep trying to obfuscate reality by claiming that Baloch fighters are working at the behest of India’s spy agency Research and Analysis Wing [R&AW] for pecuniary benefits. However, it can’t conceal the fact that it’s Pakistan’s army excesses in Balochistan that has motivated its people to retaliate in an attempt at self-preservation, even at grave risk to their lives and limbs. This is exactly what BLA has once again reiterated by saying, “Today, the way the occupying enemy [Pakistan army] is burning houses and shelters of innocent Baloch citizens, making our mothers and sisters weep in the streets, is further increasing hatred against the enemy among our youths”!