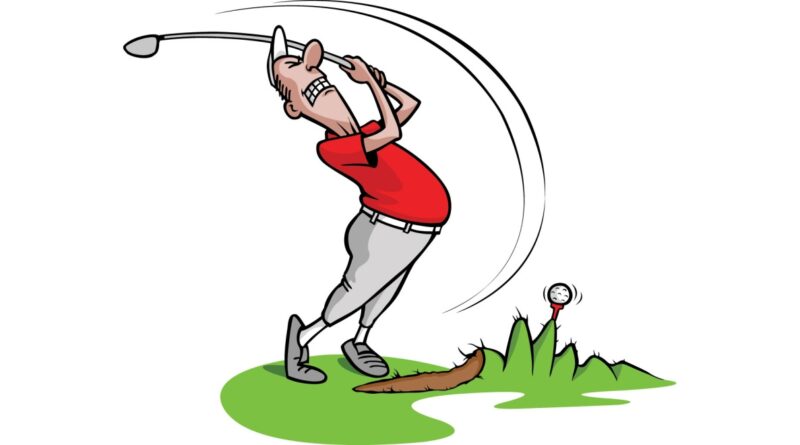 Those of you who were drawn to this blog by the title and hoped for an analysis of pop genre or an insight into the wonderful Bryan Adams song of 1996 (18 Till I Die), are in for a disappointment. This is not about eternal youth or the prolific Canadian songwriter and singer. It is about something much more esoteric, arcane, life sapping and on the whole exacting. Ladies and gentlemen I am going to talk Golf…my golf, more precisely.
Far too many good golfers and good writers have written good stuff about golf for a bad writer and a bad golfer to add to the available stockpile. So what can be my contribution? Simply put, misery. I start with my plaintive lament which revolves around the figure 18. In 18 years of playing golf, often 18 holes on an outing, I have not been able to break 18. That is a lament which many of my golfer friends would agree, can be cause for considerable anguish.

Source: http://cloud2.golfloopy.com/wp-content/uploads/2012/05/Why-Most-Amateurs-Suck-at-Golf.jpg
So let me begin where it all began. When I first held a driver, 1 Wood for some, in my hand, I felt like an old age cave-man with a hunting club must have. Out for the kill – Golf, here I come! Except I never did come and have metamorphosed in 18 years at best into a spear-man with only slightly better hunting skills. As far as the kill goes, it was I who died a thousand deaths each time I was out on the fairways.
My first golf coach was a wrestler. His claim to fame as a golfer lay in his vast experience as caddy for a senior Army honcho. For him the fundamental tenets of golf and freestyle wrestling varied only in minor detail. He understandably imparted lessons in force – strength, if you will, in use of the big clubs. Lessons which I could only just unlearn in years of subsequent coaching and playing. I bludgeoned the ball mercilessly, revelling in the applause that the occasional long drive, one in probably 100 (with the law of averages at work), brought my way. I was naive enough to believe that I would improve with time. 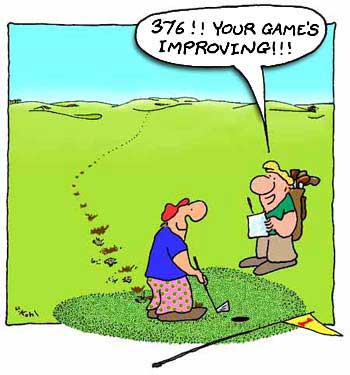 Source: https://lh3.googleusercontent.com/hbNiMkbQLIRa9UB-3VRpDbBrbtp7nty35r0Lzrzmvs-o2SMJo1TmmsVKQASDgHpDzZzKfA=s85
My golf saga is a story of woes, failures, humiliation and torment. You have some idea by now, I am sure. When my wrestler coach failed to improve my game, I took recourse to watching golf videos and CDs – there was no YouTube then – I would otherwise have had a more credible source to blame for my game. After every 30 min video, from the fundamentals of grip, swing, driving, chipping, bunker play to putting, I would go out on the links with renewed fervour and the proverbial spring in my steps. Only to play worse than I did the other day. The oft quoted quip, “no matter how bad you play today, it will probably be worse tomorrow” seemed to ring true. On an odd day when l managed to hit anything straight and beyond 50 yards, I beamed at my caddy and asked what he thought of my game. His reply, “Personally I prefer golf, Sir” (another well known quip), did little to boost the spirit or my golfing fortunes.
And so it progressed, or rather regressed, year after year. Made of stern stuff, I was not one to give up. Took professional coaching, tried to learn from senior golfers, watched YouTube videos, (it had surfaced by the time I reached a 36 handicap), took paid online coaching and so on. Changed my golf gear from gloves to clubs several times, but only improved to about one bogey in a month and a par in about 3. I would slice, I wood hook, I wood pull, I would draw, I would create craters in the fairway, miss the ball altogether and came up with shots which were in no golf manual. On occasions, I thought I almost heard the ants & critters say (as the joke goes), that with me loose on the greens, their best chance of survival was to get on the ball.
My gloves tore, clubs broke, balls lost in dozens, back and shoulders hurt like hell, wrists swelled up, but the passion only grew. The spirit was unbroken. The wife, never a fan of the game (or me), was only pleased for the fact that golf kept me out of her hair for long periods. She was however quick to notice my awkward gait, general irritability and snapping around the house. Said I was getting on in years and had generally been good for nothing all along, so what made me think I would excel at golf. Give it up, she added as encouragement, while your body juices still flow. This galvanized me and I took the gauntlet – here lay my one chance of proving her wrong. I was not about to throw in the towel.
Into my ninth or tenth year of golf, it began to dawn on me that I could never be good at the game. A measure of my commitment and unflagging spirit can be gauged from this – what should have been evident in three months took me ten years. I cheated, moved the ball when no one was looking, cut my strokes on the card, but never could break into the respectable 18 or lower bracket. I changed four-balls to save myself from embarrassment, got down to two-balls and when even that didn’t work (for the partner, more than me), I started playing alone. I could now lie and brag about a great game to buddies – it was never less than one birdie and two pars at least in nine holes ; my caddie knew better, but he was not telling! I paid him a little over the caddy fee each time. 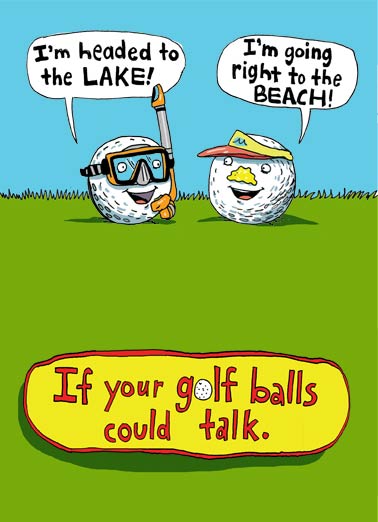 Source: https://tse3.mm.bing.net/th?id=OIP.u_-M3XjeKB2wnWt4c8xR6AHaKO
Tournaments and monthly medal rounds posed a fresh challenge every time. I could not any longer get away by saying I was a beginner, even as a new golf course did provide me immunity for a while. After discrediting myself in a few tournaments (I did however, never fail to collect the complimentary cap, T shirt, ball sleeve or whatever goodies were on offer), with my felicity for words, I took to compering at golf championships. This provided me a graceful exit and saved me the blushes so often. As is customary, I would need to start and finish the ceremony with ‘golf jokes’. I often said that I was the biggest golf joke going around – after years of playing was nowhere near 18. This drew only polite titters… but several pitying looks. So the jokes didn’t work either.
And so it goes. From playing golf (or what most would call golf), to talking about it and now to writing on it. With liberal outings, comprising long sessions at the driving range and the fairways thrown in. I plod (ploughed?!) on in the hope that my relationship with the game and with the Golf Gods would take a turn for the better and someday I would actually break 18 without cheating or devising my own rules and heckling my partners.
Hasn’t happened. My dust laden golf books, magazines, videos, CDs seem to mock at me from their shelves. Golfers on the course, on seeing my lone figure trudging along, or searching his ball in the woods and bushes, give me a wide berth. While I imagine it is respect for a senior golfer, something tells me that they steer clear because my golf balls can fly in any direction. On the odd occasion when kind golfers agree to play with me, it is probably only because I have promised champagne for all the day I break 18. They know and I know that’s not likely ever…at best I will be 18 till I die.
Make no mistake however. Despite being at odds with me through my playing career, golf has given me unmitigated joy, great moments, wonderful friends,unforgettable times (for more reasons than one) on lush green, open fairways, under a balmy sun on innumerable clear blue sky days. As I approach old age, I take hope and succour in the fact that I will be able to use the veterans’ tee…a good 20 yard advantage. That might help a fellow who has been struggling for his yards for so many years. If that doesn’t work either, have told the wife to pack my golf gear with me when I leave for the netherworld – I am not going to stop playing till I break 18. I am hoping the angels would be kinder and look the other way when I move the ball. So if it could never be 18 here, it could well be 18 in the hereafter. Amen!
**********
© Maj Gen Sharabh Pachory. All rights reserved.
This is a work of fiction.
Cartoons from sources as indicated against each.