On 15 September 1998, at the Convocation Hall of the Roorkee University, a frail old man was helped on to the stage to deliver a talk to the serving soldiers and veterans of the 4th Battalion of the Brigade of Guards (1Rajput) who had assembled to commemorate the bicentenary of the Battalion’s raising on 15 September 1798 in Sasaram, Bihar. The frail old man was Brigadier Bakshi Kuldip Singh, a former Commanding Officer, who then was well into his late eighties. We felt a tinge guilty in subjecting such a venerable old soul to this ordeal of addressing about a thousand odd officers and men. But once on the stage and behind the speakers table, the ‘tiger’ in him resurfaced, and what follows is a summary of his stirring talk. It is an invaluable historical record of India’s first Independence Day and the days following it. The account is given in the first person, in the manner spoken by Brig Bakshi Kuldip Singh.

“Here I wish to narrate the circumstances under which I brought my Battalion 1/7 Rajput (QVOLI) now 4 Guards (1Rajput) in 1947 from Razmak in the North West Frontier Province in Pakistan on the Afghanistan Border. In 1947, the Razmak Division was commanded by Maj Gen Lee Fleming and it had three Brigades, one each at Razmak commanded by a British Officer from 5/8 Punjab, Gardai Brigade commanded by Brig (later President) Ayub Khan and the Bannu Brigade commanded by Brig Khan. 1/7 Rajputs at Razmak decided to celebrate the Independence night 14/15 August 1947 in a befitting manner. I sent an officer on casual leave to Delhi, to procure two National Flags for all officers and men to take an oath of allegiance to defend the newly Independent India. 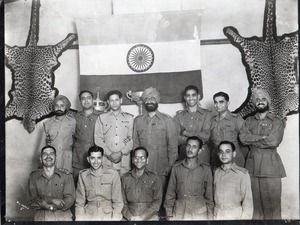 The officer returned with two flags in the first week of August. 1/7 Rajput at that time had 50 percent Hindus and 50 percent Muslims in the Regiment. The Muslims were transferred to 5/8 Punjab (present 5 BALUCH) which was also at Razmak and from the Punjabis we received two companies of Hindus. At this time, our Battalion had no British or Muslim officers posted, and all officers were Hindus. There were two other Hindu officers in the Division and Brigade HQ plus some signallers and clerks. At the stroke of midnight, on the night of 14/15 August 1947, when Nehru was delivering the ‘Tryst with Destiny’ speech from the ramparts of the Red Fort, we hoisted the Indian Tricolour on Pakistani soil, one in the Unit lines and the other in the Officers Mess and we swore our allegiance to defend and protect our Country.

During the last week of September, one evening I went to call on Maj Gen. Lee Fleming the GOC of the Razmak Division, at his residence. The Brigade Commander was sitting with him. This was tribal territory and very disturbed conditions were prevalent, but I had failed to carry any weapon with me. But soon, my orderly Kalyan Singh, a Rajput from Agra, brought my loaded service pistol in one hand, and a loaded .32 pistol in the other and placed them on a table in the Division Commander’s drawing room and said in a tone of admonishment “Saab, aap apna hathiyar saath nahi laye hain.”

The Division Commander’s Guard had not been able to prevent him from entering his house. Noticing this, Gen. Fleming remarked to the Brigade Commander “Nobody on the Earth can stop the 1/7 Rajputs from doing what they want to do, and they will be able to get out of Razmak when they choose to!” Both the GOC and the Brigade Commander told me “Kuldip, the orders of the Pakistan Army Headquarters are such that we cannot help you. The Muslim troops have given their pouch ammunition to the Pathans, and they are hell bent in ensuring that you do not take out your Regimental Colours and silver with you to India. The Pakistan Army HQs’ orders are that no help is to be given to you! We are the only two British officers here, and there is nothing that we can do.” However, he added, “two of the senior most officers in the new Pakistan Army, Maj Gen Raza, the Adjutant General and Maj Gen Nasir Ali, the Quarter Master General are ex officers of your Regiment. Could you ask them for help to get your Battalion out of here.”

I requested the Division Commander to make 1/7 Rajput the Reserve Battalion to the Road Opening Force in October. In those days, the road from Razmak to Bannu was opened once a week during the daytime. Gen. Fleming told the Brigade Commander to do so, as requested by me. He had been my Company Commander in the Indian Military Academy, Dehra Dun and in one of my ‘Reports’ had stated “an old head on young shoulders,” when writing about me. None of my officers or men knew of my Plans, the only exception being my Subedar Major Devi Singh, an exceptional man and a pillar of strength. (Sub Maj Devi Singh was the uncle of Gen V. K. Singh, the former Army Chief and now the Minister of State for External affairs. Sub Maj Devi Singh was succeeded as Sub Maj of the Battalion by his younger brother, Sub Maj Ranjit Singh, another exceptional old warrior.) 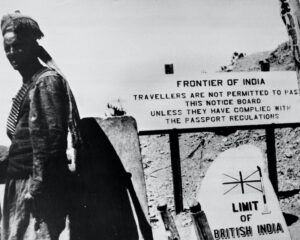 We had a barrack at Bannu, where we kept our stores and it also served as a Transit Camp for our leave parties. We quietly sent all our baggage to Bannu in small batches on road-opening days. During the first and second weeks of October, we carried out normal duties of the Reserve Battalion, but during the third week, I decided to make a run through to Bannu. On road-opening days, both the Division HQ and Brigade HQ used to move to Razmak-Narl, the highest point on the Razmak-Bannu road. On reaching there, I got down from my jeep and saluted the Division and Brigade Commanders, and thanked them for helping me. On the way was the Bakshahi Picket, commanded by Capt Limey and which was manned by one JCO and twenty-eight Hindu troops, plus some signallers. I made arrangements with them to ensure that nobody knew about the move of my Battalion to Bannu. I also ensured that all communication links – wireless and land line – were cut off. I had to do this for security reasons, for I did not trust the Pakistani officers who would let loose the Pathans to interfere with our Plans. On reaching Gardai, I called on the Commander of the Gardai Brigade, Brig (later President and Field Marshal) Ayub Khan. After saluting him, I told him I am off to Bannu. In 1943, I was DAAG in the Peshawar Division and he was the Brigade Major of the Brigade, so we not only knew each other but were also friends. We shook hands and made our farewells.“We will meet at Panipat,” he said, to which I replied “I will be there to receive you with open arms”. We reached Bannu in the evening and pitched camp on the camping ground. I, along with my Adjutant then went to meet Brig Khan, the Bannu Brigade Commander and informed him that 1/7 Rajputs was in Bannu, and requested him to come and inspect the Battalion. “How the hell did you reach Bannu?,” he asked. He had presumed that the tribesmen would not have allowed us to move out of Razmak.

Now that we are here, Sir,” I told him, “will you kindly make arrangements for our move to India.” “No Muslim train engine driver will agree to drive your train,” was his response. Fortunately, I had a wartime Emergency Commissioned Officer who had earlier been in the railways, and he said “Sir I will drive the train.” He trained another officer to also drive the train. At Bannu, almost all the non- Muslims came to see me and pleaded that I take their young girls back to India for their safety! Against all rules and regulations I brought three hundred non-Muslim girls to Amritsar. I requested that four or five elders to accompany the girls, to look after them. From our supplies, we provided two weeks of rations to them, as except for cash and jewellery, they could not carry anything else. 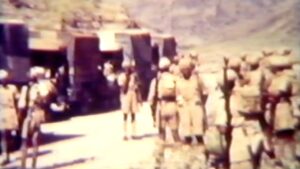 m Bannu, the battalion travelled in two narrow gauge trains to Mari-Indus, where we had to stop for two days to arrange for a broad gauge train to Attari. We put all the civilians in one bogey. Though uncomfortable and crowded, they were safe. From Mari-Indus, we never stopped at any main station or town to avoid a general massacre. We reached Amritsar on 3 November, from where the train was to take the Battalion to Ranchi. However, at the Amritsar Railway Station itself, we were met by Brig. M. S. Chopra along with his Brigade Major. They were carrying a TOP SECRET message from Indian Army Headquarters, asking him to inspect the Battalion for fitness for War. After inspecting the Battalion, Brig Chopra reported back to Army Headquarters that 1/7 Rajputs was fit for any task that may be allotted to them, and in addition they were carrying thirty days of contact rate ammunition and also their Battalion heavy weapons! This was contrary to orders, which stipulated that only twenty rounds per man was to be brought out from Pakistan. The train was immediately diverted to Gurdaspur with orders for the Battalion to relieve 77 Para Brigade commanded by Brig Usman. On being relieved, the Para Brigade was to move to Jammu as the Pathan Raiders had started pouring into Kashmir. We took over the responsibility for the Border from Madhopur to Dera Baba Nanak.

The next day we were visited by Lt Gen. K. M. Cariappa, the GOC in C Western Army Command. Gen Cariappa was an old officer of the Battalion and we were very happy to see him after coming out unscathed from Pakistan. The General inspected the Unit and was pleasantly surprised to see the Battalion not only fighting fit, but overflowing with war-like stores, over and above the authorised scales. He said that he did not have a pair of woollen socks, whereas 1/7 Rajput stores were overflowing with stocks of winter clothing! We had even more than the authorised number of machine guns and 3 and 2 inch mortars! Gen. Cariappa requested us to share some of our excess stocks with other Units who were woefully short of these essential stores. The very next day, they were dispatched in trucks to the Units that needed them and which were being inducted into Kashmir. I did however hold on to some extra machine guns which I needed for the defence of my Sector, which earlier was held by a Brigade. Thereafter, I was posted to Fatehgarh as Commandant of the Rajput Regimental Centre, and Lt Col Guman Singh took over the command of the Battalion. The Battalion then moved to Kashmir and the command thereafter passed on to Lt Col BP Singh. The Battalion went on to win one PVC, two MVCs and ten VrCs in the 1947-48 Kashmir War.

Maj Chandrakant Singh, VrC (Retd) Commissioned in 4 Guards (1st RAJPUT),  Major Chandrakant Singh, VrC is a veteran of the 1971 Bangladesh Liberation War, where he was wounded and awarded the VrC for conspicuous gallantry and courage displayed throughout the war. Popularly called ‘Paunchy’ by his friends, he took premature retirement in 1977 and is now involved in writing and speaking on environmental and defence related issues.

Note– Above Article was published in the magazine Salute on September 8, 2017. Photographs courtesy social and elec media.