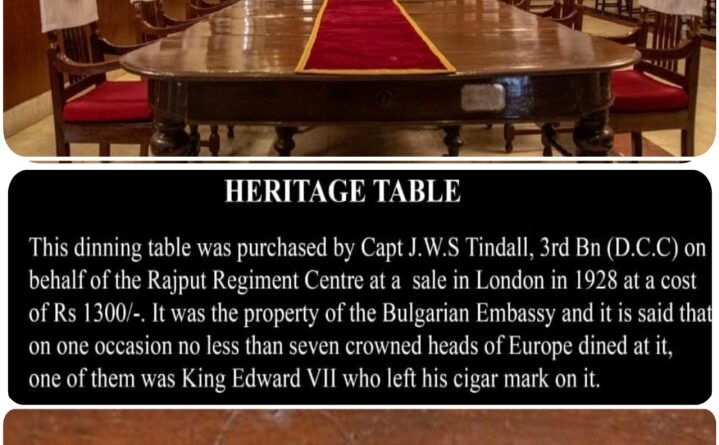 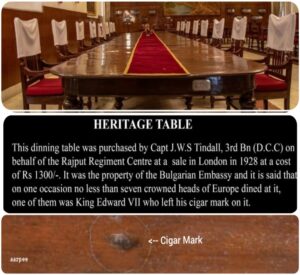 When we were commissioned on 15 Dec 1976 to The Rajput Regimental, we were given movement order by Indian Military Academy to report to The Rajput Regiment Centre Fatehgarh (UP) on pre-training for Young Officers’ Course. We as the Second Lieutenant, Anirudh Chakravarty , Amulya Mohan, RC Arya, Chand, RS Nagar & Self , arrived on the last day of the year to undergo training. In fact, few YOs of Short Service Commission had almost completed their Pre Course and we’re all set to move out to Infantry School Belgaum for YOs (Weapon, Tactics and Commando).
The Heritage Dining table was our favourite place, as it was mandatory to dine in the Officers’ Mess (on payment, no free ration in the peace area). Why favourite, because toughest training by Rajput Regiment NCO, have breakfast, back to lunch and dinner. No room service.
The best services in Bar and in the Dining Table was by the Regiment moving Encyclopedia, oldest Butler/ Aabdar/ Senior waiter, “Chhote”. Chhote told us about the trophies and Mess building. When we sat down first time on Dining Table, he explained the heritage burnt mark of the British King Edward VII’ Cigar when he must have dinned before the purchase by Capt JWS Tindall 3/7Rajput on behalf of the Regimental Centre.
The table was extendable, but due to the small dining hall, with elbow space, sitting capacity was 18 (16 + 2, Mr President and Mr Vice President on either side of table heads.
Later when a large dining hall was made thee replicate Dining Tables were added. All four in the dining hall of Officers Mess, are similar-looking now, though the replicate not so classy.

HERITAGE TABLE
This dining table was purchased by Capt J.W.S Tindall, 3rd Bn (D.C.C) on behalf of the Rajput Regiment Centre, Fatehgarh at a sale in London in 1928 at a cost of Rs 1300/-. It was the property of the Bulgarian Embassy and it is said that on one occasion no less than seven crowned heads of Europe dined at it, one of them was King Edward VII who left his Cigar Mark on it.