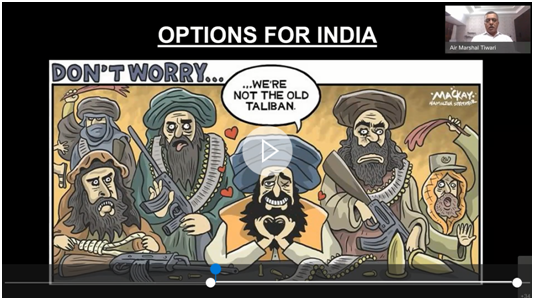 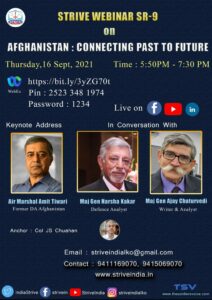 STRIVE organized a webinar on the subject on 16 Sep 21. It was done in two parts. In Part-I, Air Marshal Amit Tewari, PVSM, ASM, VM, delivered the Keynote address and in Part-II, in a virtual conversation, Maj Gen AK Chaturvedi, AVSM and Maj Gen Harsha Kakar took the discussion forward covering a 360-degree perspective on Afghanistan. Col JS Chauhan was the Anchor of the programme who later conducted the Q&A session. Col RP Singh provided the technical support for the conduct of the webinar and Col AK Singh and Col Nilesh Kanwar did the recording of the event.

Objectives of the Webinar– Following issues were identified for analysis during the webinar: 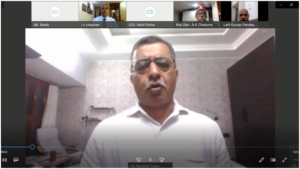 Air Marshal Amit Tiwari who has been an Air Attaché in the Indian Embassy at Afghanistan gave a very detailed overview of the Afghan issue. Some of the important issues highlighted by the speaker were as follows: 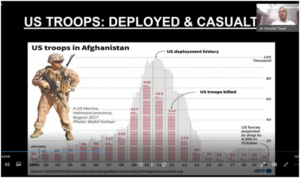 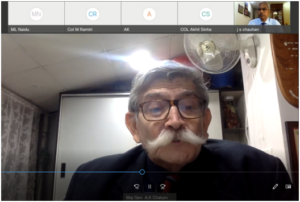 In his concluding remarks, the Vice Chairman of the STRIVE, Maj Gen AK Chaturvedi (Retd) emphasized that the situation in Afghanistan is still very fluid and quite serious from the perspective that likelihood of export of terrorism from Afghanistan, with Taliban in power, is quite real. India and other neighbours, in short to medium term, will have to remain vigilant against a spurt in terrorist activities in their respective countries. Pakistan may be gloating over with the fact that they have been able to create a strategic depth in Afghanistan, but with a belligerent TTP likely to get a boost with Taliban in Kabul, she needs to be ready for more unrest in border areas. In any case she will have to deal with the financial and security stress due to refugees in immediate terms.  With Taliban 2.0 showing no change in its attitude from Taliban1.0, with the Haqqani Network in driving seat, India needs to remain vigilant against likely spillover of the small arms and as such a boost to the morale of Kashmiri militants. In terms of the management of the geopolitics of the region it is a challenge for the Indian diplomacy to wean away Iran and Russia from their support to Taliban to counterbalance China- Pak nexus with a view to regain her relevance in the region. May be a stronger support to Afghan people by completing the stalled projects and taking initiatives for the humanitarian assistance under the aegis of UN will help India.

With inputs from Col AK Singh and Col Nilesh Kanwar!

2 thoughts on “Hot Wash- Afghanistan: Connecting Past to Future By Team STRIVE”