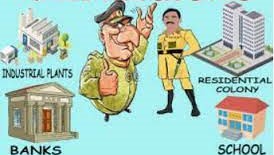 If an outsider was to say that there’s rampant corruption in Pakistan army, especially within the top echelons, Pakistan army’s media wing Inter Services Public Relations [ISPR] would label that person a “RAW agent” trying to malign the military and terming such assertions as “motivated”, outrightly dismiss the same. However, what explanation can ISPR offer when patriotic and well-meaning people in Pakistanlevel similar charges against Rawalpindi?

In her extensively researched book “Military Inc.: Inside Pakistan’s Military Economy” published in 2007, noted Pakistani activist Ayesha Siddiqa reveals the highly opaque manner in which Pakistan army conducts its commercial activities. Infact, after realising that it’s “a completely independent genre of capital,” she felt it necessary to coin an appropriate term- “Milbus” [military business], and defines it as “military capital that is used for the personal benefit of the military fraternity, especially the officer cadre, but is neither recorded nor part of the defense budget.”

Elaborating further on “Milibus,”Ms Siddiqa notes that its “most significant component is entrepreneurial activities that do not fall under the scope of the normal accountability procedures of the state, and are mainly for the gratification of military personnel and their cronies… in most cases the rewards are limited to the officer cadre… The top echelon of the armed forces who are the main beneficiaries of Milbus justify the economic dividends as welfare provided to the military for their services rendered to the state.” The scale and extent of Pakistan armed forces involvement in commercial activities is indeed mind boggling as they seem to have interests in almost every business under the sun!

During July 2016, in his written reply to a question asked by a Senator, Defence Minister Khwaja Asif informed Parliament that the armed forces of Pakistan were running nearly 50 commercial entities. These included banks, bakeries, petrol pumps, schools and universities, shoe, woollen, apparel, food processing production units, milk dairies, stud farms, cement plants, an insurance company and even restaurants and wedding halls! They also have an exposure in insurance, agriculture, fertilizer and aviation sectors. So much so that in 2008, Pakistan army’s Fauji Foundation even floated a company called ‘Pakistan Maroc Phosphore SA’in faraway Morocco.

Three years later, Pakistan’s Supreme Court Judge Justice Gulzar Ahmed passed strictures on the army to cease commercial activities on military-owned land. In a scathing attack, he observed that “Defence Housing Authority [DHA] of Karachi have encroached so far into the sea. If they had their way, they would build a city on the sea. The owners of DHA would encroach on the entire sea all the way to America and then plant their flags there. The owners of DHA are wondering how they can make inroads into India!”Infact, Pakistan army’s phenomenal lust for land, [at both individual and organisational levels] is understandable as it gives maximum returns. Ms Siddiqa reveals that Pakistan army owns 12 per cent of the country’s land, and out of this, with two-thirds being owned by senior ranking military officials.

In an investigative piece(‘Bajwa family business empire grew in four countries in sync with Asim Bajwa’s rise in military’, Fact Focus, August 27, 2020), noted Pakistani investigative journalist Ahmad Nooranipublishedvery specific and verifiable details thatretired Lt Gen Asim Bajwa and his family members ” own a business empire which set up 99 companies in four countries, including a pizza franchise with 133 restaurants worth an estimated $39.9 million.”  Whereas, there’s nothing wrong in a former General creating wealth, but two things make this case suspicious- one, he didn’t declare his offshore wealth or assets, and two, though he termed these assertions a “malicious propaganda story,”Lt Gen Bajwasurprisingly didn’t consider it necessary to approach the courts to redeem his honour by slapping a defamation suit against Noorani.

No prizes for guessing why!

In his 2008book ‘Crossed Swords: Pakistan, Its Army, and the Wars Within,’ Shuja Nawaz mentions abouthow a self-created “culture of entitlement” is rampant in the military, especially amongst its top brass. Last year, while ruling on a case regarding the Federal Government’s housing project, Justice Qazi Faez Isa of Pakistan’s Supreme Court invoked this book saying that even though gifting land didn’t have constitutional or legal sanction, “nevertheless, senior members of the armed forces get plots and agricultural lands and continue to be given additional plots and agricultural lands as they rise up the ranks.”

There was a time when Pakistan army’s first chief Gen Douglas David Gracey turned down Gen Ayub Khan’s request for a plot of land. However, this happened long-long ago and if Gen Ayub was alive today, he would have had just no problems as his successors have successfully ‘institutionalised’ land allotment to themselves.  Justice Isa rightly opined that “If lands are given to only one category like the members of the armed forces and the civilians in the service of Pakistan are disregarded, it constitutes discrimination and offends the fundamental right of equality.”

However, when there some rumblings against allotment of 90 acres of land to former army chief Gen Raheel Sharif, Dawn newspaper quoted a security establishment official as saying that there was “nothing unusual” as it was “in accordance with the existing rules and purely on merit.”The “existing rules” on grant of land to Pakistan army chiefs are indeed very interesting for two reasons. One, they lack any approval from Government of Pakistan, and two, the entire process right from putting forth the proposal to identifying land to be gifted and its final approval rests with General Headquarters [GHQ].

Records of all land along the borders is maintained by Border Area Committee [BAC]. Its chairman is an army officer of Brigadier or Colonel rank with an assistant commissioner as the civil member assisted by a revenue officer [tehsildar] and his staff.The BAC projects the requirement of land to the concerned Provincial Board of Revenue [PBR], which in turn passes on the details to the district collector [DC]. The DC the same to the establishment officer who issues the land allotment order.

So, while it’s surprising that all this is done without any written rules on the subject, what’s even more perplexing is that civil officials still consider that an establishment officer is ‘legally bound’ to implement the orders of the BAC chairman! So, by involving the civil administration but making sure that it has no other option but to honour the GHQ’s ‘request’, Rawalpindi has cunningly given this patently illegal practice a veneer of legitimacy.

More than three decades ago, the then Jamaat Islami Amir Qazi Husain Ahmedhad quipped that corps commanders of Pakistan army were actually “crore” [millionaire] commanders, a rather embarrassing sobriquet that Rawalpindi has been unable to playdown. How badly has Pakistan army’s land grab has riled the public became evident during the 2007 protests that broke out when Gen Musharraf removed Chief Justice of Pakistan, when lawyerscarried banners proclaiming “Ae watan ke sajeele Genrailon; saaray ruqbey tumhare liye hain [O’ handsome Generals of the country, all the plots are there just for you],” even though this issue wasn’t in anyway connected to the protests!

Infact, with National Assembly’s Standing Committee on Interior approving the bill for amending Pakistan Penal Code and Code of Criminal Procedure 1898 to criminalise any attempt to ridicule Pakistan’s armed forces, it’s clear that public resentment against Pakistan army’s “culture of entitlement” has reached tipping point! But whether the “crore” commanders of Pakistan army will reform themselves or throw the book at those who object to their financial impropriety remains a million dollar question!