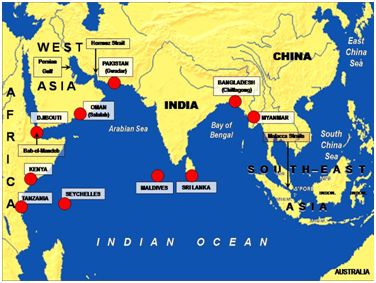 India is probably the only country which faces multiple threats along our land borders which has been a consistent historical trend since ancient times. While threat from the Western border has been in perpetuity, manifestation along the northern border has been a recent phenomenon. Further, if we consider the Chinese effort to isolate India along its maritime boundary, threat to India appears not only dangerous but ominous. Chinese activities in the South China Sea and the Indian Ocean Region such as development of a $1.5 billion gas and oil pipeline from Kyaukpyu port in Myanmar in the Bay of Bengal to Yunan in China, development of CMEC (China Myanmar Economic Corridor), establishment of a Naval Base in Bangladesh, purchase of two submarines from China by Bangladesh, seizing control of Hambantota Port in Sri Lanka, presence in Gwadar and development of CPEC in Pakistan and establishment of military bases in Djibouti, Maldives and Seychelles have not only enlarged the presence of China globally but also added the maritime dimension of maritime threat to India. Maritime threat to India has further magnified due to Chinese effort to gain access to Iranian Chabahar and Jask ports in the Persian Gulf. Chinese effort while aiming to overcome the Malacca Dilemma also enables it to encircle India. China has also been testing waters against the US, Japan, Australia and ASEAN countries such as the Philippines, Indonesia and Vietnam by gradually pushing for its interests in the South and East China seas.